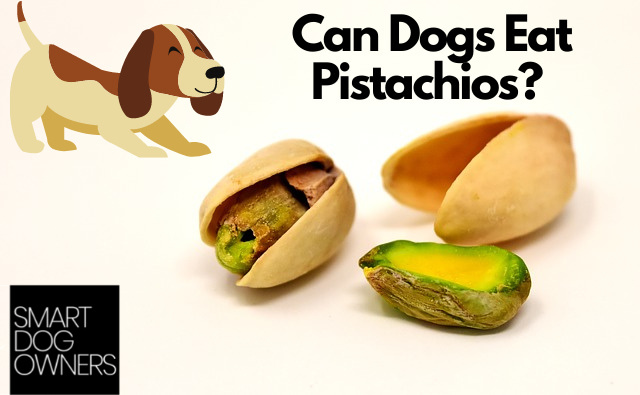 Table of Contents hide
What is pistachio and are they safe for dogs to eat?
Can my dog eat pistachios too?
Are there any benefits to feeding dogs pistachios?
Are there dangers present for dogs eating pistachios?
Signs of Pistachio Poisoning in dogs
Dog Treats… Pistachios Are a Poor Choice

What is pistachio and are they safe for dogs to eat?

What we know today as the “modern pistachio,” Pistacia vera, was introduced into the US in the mid-1850s as an ornamental garden tree. The nuts were originally dyed red before they were put on display in most American grocery stores in order to make the nuts more attractive to consumers.

This practice has largely fallen by the wayside due to the incredible amount of people allergic to the chemicals in red food dyes.

Today the US grows and exports up to 76% of the world’s pistachio nuts, second only to Iran. They are also major export crops in China and Turkey. It goes without saying, then, that with all the dog owners in the world eventually a dog is going to eat pistachios, either through accident or by being fed the nuts directly by their owner.

Can my dog eat pistachios too?

Yes, your dog could probably eat one or two nuts without any harm but there are risks involved that should not be taken lightly.

Are there any benefits to feeding dogs pistachios?

There are not many scientific experiments showing whether dogs would benefit from pistachios as a supplement to their diet.

Are there dangers present for dogs eating pistachios?

If you are considering giving your dog pistachios as a treat, you should consider both the physical and chemical hazards that these nuts present to your pet.

The pistachio itself is not toxic to dogs though there is a high risk that some of the chemicals in the nuts may cause problems with the canine digestive system. As will all treats not made precisely for dogs, there is always a choking hazard present.

A dog that ingests unshelled pistachios may be in danger of the shells tearing its delicate digestive tissue. The shells are also very difficult to pass during elimination, again causing damage to soft tissues and incredible discomfort for the animal.

Dogs may have this same reaction after ingesting pistachios, especially on their faces and around their mouths. Another natural chemical, phosphorus, is found in high amounts in pistachios. High levels of phosphorus are thought to be a cause of canine bladder stones.

Aflatoxin may also be present in some pistachios, especially those that have been improperly harvested, handled, and stored.

Aflatoxin is a carcinogenic chemical that is released from two varieties of aspergillis mold that grow on nuts in general that are stored improperly, such as when they are kept in an environment that is too damp.

The shell of a pistachio nut generally protects it from mold invasion but sometimes the shells split too soon and they can become infected. Entire crops have had to be destroyed when people have become sick and died from the mold infestation.

Signs of Pistachio Poisoning in dogs

Dogs that have ingested pistachios may present with the following symptoms: dehydration, diarrhea, orange urine, greasy stools, or vomiting. Any dog with a swollen abdomen, overall weakness, weight loss, dermatitis, or jaundice should be taken to the vet immediately. Pistachio poisoning can lead to liver failure, bladder stones, and pancreatitis.

With the hundreds of varieties of man-made and, natural dog treats available, pistachios (and other nuts in general) should perhaps be at the bottom of the list.

As part of the canine species, dogs prefer either real meat or snacks that are produced with meat flavors and look like meat. If your dog accidentally eats a pistachio or two it probably won’t hurt him, however, with all the risks involved it may be better to keep the little green nuts for yourself.