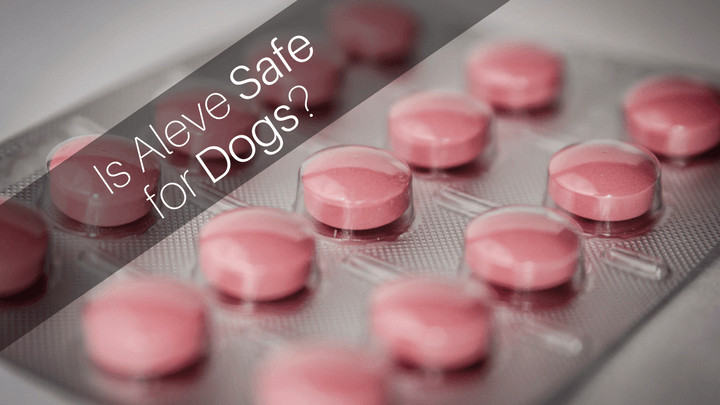 Migraines, back pain, and general wear and tear on your body often leave you reaching for your favorite pain reliever to alleviate the discomfort. It isn’t hard to find an effective pill to help with whatever you’re feeling, but your dog doesn’t have that luxury, unfortunately. If your dog is suffering from pain, you can’t just run to the corner drugstore and pick up something to make them feel better. In fact, many human pain medications are actually deadly to dogs.

Table of Contents hide
Is Aleve Safe for Dogs?
Is Aleve Bad for Dogs?
What Can You Give Your Dog for Hip Pain or Arthritis?
What Should I Do If my Dog Ingests Aleve?

Is Aleve Safe for Dogs?

Aleve is comprised of a medication called naproxen, which is a non-steroid anti-inflammatory drug (NSAID). NSAIDs treat pain and reduce the inflammation associated with minor injuries. Naproxen is very safe for humans, but it’s very toxic to your dog. This is due to its potency; many people report that naproxen is far more effective at pain relief than ibuprofen or acetaminophen. A simple 220mg tablet is enough to kill even a very large dog, meaning there is no safe dog dosage.

Is Aleve Bad for Dogs?

Dog side effects after ingesting Aleve are quite severe. Even a small ingestion can cause dangerous stomach ulcers. Ulcers are very painful and present with bloody vomit or black, tarry stools. Ulcers might seem fairly innocuous, but they have the potential to be lethal. If the ulcer eats all the way through the stomach, the bacteria and acid in the stomach will flood the abdominal cavity and lead to a full body infection. This infection is very hard to treat and can even lead to death. Some dogs become anemic from the bleeding ulcers and have pale gums and seem weak and lethargic. If you notice your dog’s stool looks tarry, their vomit looks like coffee grounds, or their gums are very pale, this indicates bleeding somewhere in the body. At this point, it’s paramount that you take your dog to the vet immediately.

Aleve will also cause acute kidney failure. A dog’s kidneys can’t break down naproxen like a human’s can, and the medication will damage the kidneys’ cells as they try to metabolize the drug. If your dog has eaten Aleve and seems like they aren’t showing any symptoms, that doesn’t mean they’re going to escape unscathed. Kidney damage will occur within a few days of ingestion and signs start with exaggerated thirst. Even if they’ve slurped down an entire bowl, they’ll act like they need more. It isn’t uncommon for dogs with kidney damage to seek water out from places like the toilet bowl. Their urine output will also increase, but as the kidney damage progresses, they’ll start producing less urine. The urine itself will darken in color and become very potent in smell. Kidney damage is not reversible, so this stresses how important it is to not wait until you see symptoms before you seek veterinary attention.

What Can You Give Your Dog for Hip Pain or Arthritis?

Since human drugs are out of the question, you’ll have to talk to your veterinarian about prescription pain medications. Some pet stores sell “dog safe” pain pills, but these are ineffective or even dangerous. Rimadyl (carprofen) is the most commonly prescribed drug and given after surgeries, to treat arthritis, or help dogs recover from injuries. Deramaxx (deracoxib) is becoming increasingly popular for arthritis. It lasts for 24 hours and works to reduce both pain and inflammation. Previcox (firocoxib) is another drug that’s excellent for treating osteoarthritis pain.

What Should I Do If my Dog Ingests Aleve?

Your dog needs to see their vet immediately after eating Aleve. This isn’t something where you should “wait and see” if your dog is affected Your dog can die from Aleve, so waiting is going to do more harm than good. Vomiting can be induced if it hasn’t been more than two hours since your dog has ingested the pills, and it’s crucial to get everything out of the stomach as rapidly as possible. Some internet resources say it’s okay to use hydrogen peroxide to induce vomiting, but this should only be done if you live too far away from the vet to get there immediately. You should follow your vet’s specific instructions for using hydrogen peroxide, and you should still get your dog to the clinic quickly.

There is never any reason to give your dog Aleve. A dog’s pain receptors aren’t affected by Aleve, so it won’t really won’t even help with your dog’s pain. Play it safe and never give your dog any medication unless it’s been specifically prescribed by your vet.