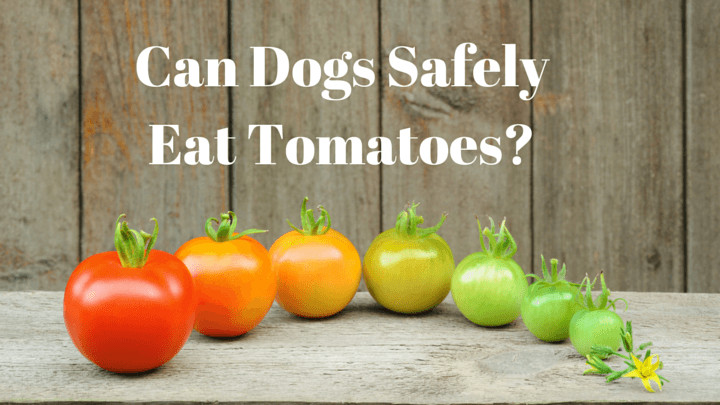 Vegetables offer a great source of nutrients for humans, but can the same be said for animals? While dogs and cats are usually considered carnivorous, in the wild they commonly forage for plants to complement their meat-based diets.

When owners are debating what little treats to slip their animals during meals, they should pause and ask themselves if it’s actually safe for their pet to consume.

Animals can’t always break down certain foods like we can, and these items can actually be toxic to them. In this case, owners might be wondering if tomatoes are okay for their dogs to eat.

Can My Dog Have Tomatoes?

The flesh of tomatoes is considered safe for dogs to eat. However, the green parts of a tomato can cause harm if they’re eaten in excess.

Solanine is a glycoalkoloid that’s typically found in plants from the Solanaceae family. Vegetables belonging to this family include potatoes, eggplants, and even chili and bell peppers, although it’s the actual plant that’s dangerous, not always the vegetable itself.

The amount that needs to be ingested is quite copious; animals that are more likely to suffer from solanine toxicity are cattle who eat solanine daily. Effects of solanine poisoning include lethargy, weakness, vomiting, diarrhea, and mental confusion.

Alpha tomatine is also dangerous to dogs and can lead to heart damage if large amounts of tomatoes are eaten.

Are There Any Health Benefits to My Dog If He Eats Tomatoes?

Tomatoes do have health benefits for dogs, but there aren’t many dogs who will willingly eat a raw tomato. Tomatoes have an antioxidant, lycopene, that is good for dogs but not considered an essential nutrient (meaning a dog doesn’t require lycopene for overall health).

Dog food companies aren’t required to put it in their foods, but that doesn’t mean that it doesn’t have its benefits. Research has shown that lycopene works to prevent cancer. Experts believe that the nutrient stops the growth of cancer cells, especially in lung and esophagus cancers.

Lycopene used in conjunction with other nutrients, like vitamins E and D, has also been shown to slow the progression of eyesight problems in senior dogs.

If you’re considering adding tomatoes into your dog’s diet because you think lycopene could be of benefit to him, the first thing you should do is consult with your veterinarian about safe ways to do so. They will warn you about the dangers of tomato sauce for your dog.

It isn’t the tomatoes that are dangerous, however; it’s the additional ingredients in the sauce. Many commercial jarred or canned versions of tomato sauce contain garlic and onion for extra flavoring. Unfortunately, both of these are quite toxic to dogs, even in small amounts.

Both garlic and onions belong to the Allium family, which damage the red blood cells in both dogs and cats. The red blood cells then burst and lead to a very dangerous condition called hemolytic anemia. Treatment for this disorder is intense and not always successful.

The best rule of thumb when you want to introduce a new food to your dog is to consult with your veterinarian. While our intentions are always good, there are plenty of non-descript foods out there that can harm our pups.