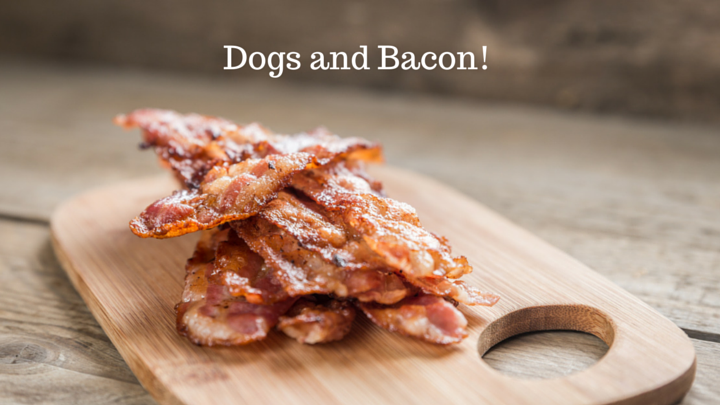 Bacon has long been a staple in the American kitchen, filling the bellies of families during Sunday breakfasts and on lazy Wednesday evenings. You’ve probably seen your dog’s senses go on high alert as soon as that strip of bacon starts sizzling in the pan.

After all, what meat-loving creature isn’t tempted by bacon? But before you start slipping your pup tidbits of this treat, consider that it’s actually not the best thing for your dog to be eating.

Can You Give Your Bacon?

The short answer is no. Bacon is particularly high in fat, and most dogs aren’t able to metabolize large amounts of saturated fat like humans can, leading to a painful stomach, diarrhea, vomiting, and a loss of appetite.

The high salt content in bacon can sometimes bloat the stomach or twist the intestines, both of which can be deadly if they aren’t surgically corrected. The pancreas can become painfully inflamed when a large amount of bacon (and its fat) is eaten, a condition called pancreatitis.

-However, in extreme moderation bacon is fine, it just shouldn’t be an everyday treat!

What Is Pancreatitis, and Can Bacon Really Cause It?

The pancreas is designed to aid food digestion by producing enzymes that break food down. Unfortunately, it isn’t able to fully break down an onslaught of saturated fat, the type of fat found in bacon. When it’s overloaded with fat, the pancreas becomes inflamed.

As the inflammation takes hold of the pancreas, it blocks the enzymes from entering the digestive tract and causes them to flood the abdominal space. When this happens, the enzymes begin to digest the fat and proteins in other organs, including the pancreas. This is very painful to a dog, but it is treatable.

Signs of pancreatitis vary depending on the severity of the case. Almost every case shows with a very painful abdomen.

Dogs will walk very delicately with a hunched back and become aggressive if their abdomen is touched. If they still have an appetite, eating will cause the pain to increase. They’ll have frequent bouts of vomiting, as well as diarrhea. They may develop a fever or a low body temperature, too.

Treatment of Pancreatitis in Dogs

When your vet has confirmed the presence of pancreatitis through bloodworks and x-rays/ultrasounds, treatment is fairly straightforward. Your vet will admit your dog and immediately hook up IV fluids to flush the fat from the body.

They might administer pain medication, as well as potassium if the dog’s levels are low. The dog won’t be given food for a few days to allow the pancreas to rest. When food can be given again, it has to be low in fat and high in carbohydrates.

For dogs who get frequent bouts of pancreatitis, their diet will need to permanently be low-fat to prevent any more cases.

Bacon might taste good, but the taste isn’t worth what it can do to your dog. Remember that even small amounts can greatly upset your dog’s digestive system.

Even if they don’t eat enough bacon to create pancreatitis, you might see vomiting or diarrhea, which are always unpleasant. Stick with treats created just for dogs; they’ll taste just as good as bacon to your dog!