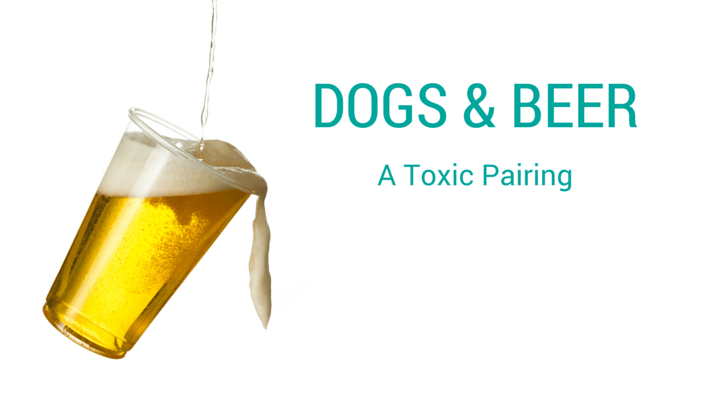 Beer is a tasty pastime. Whether it’s a summer BBQ or quiet night in front the television, almost every household has beer within its walls at some point. Certain dogs have a taste for beer, sticking their nose in half-full bottles and sniffing your brew in delight.

Before you pour your dog their own serving, however, you should put that beer back in the refrigerator and refill their water bowl.

Can I Put A Little Beer in My Dogs Bowl?

No, beer or any form of alcohol is never okay for a dog under any circumstances. When you think of your dog’s system, it’s important to remember that their livers don’t process various foods, beverages, or medications like humans can.

Beer falls into that category as it specifically needs the liver to properly break it down and flush it out of the body.

As a human, your liver can metabolize beer within a few hours, and as long as you don’t drink too much, you can go about your day relatively unaffected. A dog’s liver is unable to do this, and the effects of alcohol on the body are much more profound.

Dogs that drink alcohol can end up with serious and irreversible liver and kidney damage. If they consume enough alcohol, they can also suffer from brain damage. Because of the dog’s size, you have to remember that a small amount to you isn’t small to your dog’s liver.

Effects of Beer and Alcohol In Dogs

Alcohol will affect a dog in many of the same ways it affects people, albeit more intensely. The liver is directly affected because it’s responsible for flushing the alcohol from the system. Large amounts will definitely damage the liver, and small amounts in little dogs can cause damage.

Liver damage is never reversible, and if it occurs, it almost always gets worse as the dog ages. The kidneys are responsible for filtering blood and balancing the body’s hydration, and an onslaught of alcohol can disrupt this important function.

Alcohol will rapidly dehydrate dogs, which can also impair the kidneys’ function. You know how often you have to excuse yourself to the bathroom when you drink beer?

That’s because beer acts as a diuretic and draws the water out of your body. It does the same to dogs, depleting them of vital electrolytes that keep them hydrated.

The central nervous system will also slow down and cause a lack of coordination. It may look funny when your dog is stumbling around, but this is incredibly dangerous. When the nervous system is affected to this point, basic functions like breathing and heart rate are also affected.

It’s not uncommon to see “drunk” dogs have very slow, shallow breathing or a decreased heart rate. If the nervous system is depressed enough, it can cause irreversible brain damage and even send your dog into a coma.

High amounts of alcohol will turn the blood acidic and it can cause cardiac arrest. Cardiac arrest is almost always deadly and requires immediate veterinary intervention. The body’s blood sugar levels can also drop dangerously, causing seizures or brain damage. If your dog is diabetic, alcohol could be their death sentence.

What Happens if a Dog Drinks Too Much, Can They Have An Alcohol Overdose?

If your dog gets too much alcohol, the consequences are severe. Besides organ damage and dehydration, your dog can also experience difficulty breathing, seizures, coma, and even death. In the chance that your dog gets a large amount of alcohol, they require veterinary care right away.

Your vet will run bloodwork to see how their liver and kidneys have been affected and administer IV fluids to help clear the body of any remaining alcohol. Additional medications will be administered based on the other symptoms they’re experiencing.

Before you think about how cute it will be to give your Chihuahua a Mexican beer, consider how dangerous it is for your dog.

Alcohol isn’t a recreational beverage for canines; it is deadly and should never be given to your dog for any reason. Whether it’s beer, wine, or hard liquor, all of it has the same damaging effects on your dog.