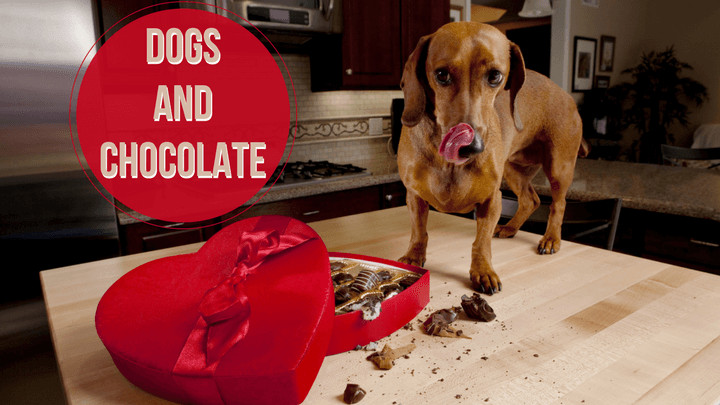 Chocolate is one of the best foods on earth. No matter what you eat it in or put it on, it’s absolutely delicious. You crave it after a bad day or eat it when you’re celebrating the finer moments in life.

From cake to chocolate-covered fruit, you can put chocolate on anything and instantly turn it into something scrumptious. But no matter how much you adore your chocolate, you should never share the love with your dog.

Table of Contents hide
Is Chocolate Safe for Dogs?
Treatment for Chocolate Toxicity
Inducing Vomiting at Home
The Toxicity Levels of Different Chocolate

Is Chocolate Safe for Dogs?

The answer is a resounding no. Dogs should never have chocolate in any form. Not only is it incredibly dangerous, it’s also deadly. Chocolate contains something called theobromine, a stimulant that affects both the central nervous and cardiovascular systems.

Dogs who have eaten chocolate and don’t receive veterinary treatment experience a variety of dangerous symptoms. If your dog has eaten chocolate, the effects start in the digestive tract. Your dog will probably start vomiting and having diarrhea.

If they still have an appetite, they probably won’t be able to keep anything down. The nervous system will also start to be affected. Their muscles will start to tremor and some dogs experience seizures. They’ll walk as if they’re drunk or become unable to stand up.

heir heart rate becomes very high, almost dangerously so, and in turn they will become restless and begin pacing or panting.The kidneys are also affected.

It’s not uncommon for dogs to have increased thirst and more frequent urination. If your dog doesn’t get immediate veterinary attention, it’s possible that the damage to the kidneys will be irreversible.

If you know that your dog has eaten chocolate, you need to get them to their veterinarian immediately. The faster your vet can induce vomiting, the less likely it is your dog will experience any symptoms. Because of this, there are a few treatment scenarios.

The first is the most ideal: you get your dog to the vet less than an hour after they consume chocolate. Your veterinarian will administer an emetic, a drug designed to induce vomiting.

Your dog will then vomit up the chocolate, where your vet will then give them activated charcoal to absorb any other chocolate that may have made its way further down the digestive tract.

Hydration is important, especially after a few vomiting episodes, so your dog will probably get fluids underneath the skin. Since the kidneys are involved in chocolate toxicity, it’s possible your vet will want to run initial bloodwork to see how the kidney levels look.

The other scenario is the less than ideal one. Perhaps your dog got into your big chocolate cake while you were at work, and by the time you’re home, your dog is already vomiting, restless, and experiencing muscle tremors.

First, you need to get to the vet immediately. At this point, inducing vomiting is probably pointless, but your vet will make that final decision. Intravenous fluids will be started immediately, and medications based on the symptoms your dog is experiencing are given.

These could include drugs to stop seizures or vomiting. Your vet will want to run bloodwork and see if the kidneys have been impacted. Your dog will require hospitalization for further monitoring, IV fluids, and bloodwork.

If you do an internet search on how to induce vomiting in your dog, you’ll get a result saying you should administer hydrogen peroxide (H2O2). There are mixed results on the efficacy and safety of using H2O2 as an emetic.

It’s relatively safe in that it won’t kill your dog if you don’t overdose them, but there’s a fine line between too much and just enough. There’s also the fact that H2O2 is fairly caustic, meaning it can burn your dog’s esophagus as they swallow and as they vomit it back up.

Most vets recommend bringing your dog into the clinic to be induced medically, but in some cases, you might not be able to get your dog to the vet soon enough. In that case, it’s a matter of weighing the risks and benefits with your vet.

If you do induce vomiting with H2O2, you should administer only one tablespoon for every 20 pounds. You should never give them more than three doses; if your dog hasn’t produced vomit after two doses, you should consider heading into the veterinary clinic.

The Toxicity Levels of Different Chocolate

If your dog has shown a love for chocolate or they’re notorious for counter surfing, always store chocolate and food containing chocolate up where they absolutely cannot get it.

All it takes is a few bites for your dog to get seriously ill, and most cases of chocolate ingestion are preventable. Don’t let your dog get sick when it can be easily prevented.