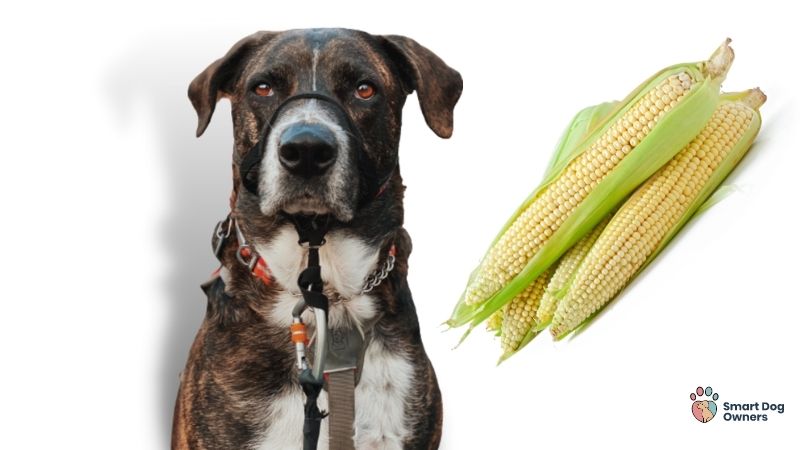 Corn gets a bad reputation in the nutrition world. Some experts say it isn’t all that healthy for humans because the human digestive system can’t break corn down. Other experts say corn is misunderstood and it’s actually good for people.

Whatever side you fall on, you can’t deny that corn smothered in butter is one of the tastiest side dishes out there. However, before you share corn with your dog, you should know it’s not that good for canines.

Corn shouldn’t be given to dogs. It’s not considered healthy but a lot of owners don’t realize this. If you read the labels of some lower quality dog foods, you’ll notice that corn is sometimes a main ingredient of the food.

This makes a lot of people think they can give their dog corn, but unfortunately, it’s just not healthy for them. It’s commonly thought corn is a common allergen for dogs, but it’s actually only responsible for less than 2 percent of recorded allergies in dogs.

You’d be surprised to know that chicken is actually more common as an allergen than corn is.

Why is corn unhealthy for dogs? It’s mostly because it’s an empty food for them. You know that corn exits the human body without being digested, and since food moves through a dog at a faster rate than it does in humans, your dog will get almost zero nutritional benefit from it.

If your dog has a sensitivity to corn, their reaction to it can be very uncomfortable for them. Their allergy can cause hives, itchy skin, and diarrhea. Because corn is hidden in so many foods, especially dog food, it can be difficult to find a diet that doesn’t trigger an allergic reaction.

The Dangers of Corn on the Cob

Dogs love to chew on a variety of things, and corn cobs are enjoyable for them to chew on. A dog should never have a corn cob! Enthusiastic dogs might swallow the entire cob whole or large pieces of it.

A lot of people think that just because a dog can swallow something that it will automatically come out the other end. That isn’t always true. The diameter of the intestine is significantly smaller than the esophagus, meaning it’s more difficult for things to pass through.

The dog isn’t able to keep any food or water down, and they’re unable to defecate. Eventually, the dog will die, stressing the importance of immediate attention after they eat a cob.

If you suspect your dog has swallowed a cob, do not try to induce vomiting. If they did swallow a large piece, it can lodge in the throat as they vomit. Take your dog to the vet immediately to get an x-ray and determine if there was an ingestion.

If there is, your vet will decide the best course of action. Trash digging dogs should never have access to trash where corn cobs have been thrown away. It’s better to dispose of them in your main trash bin outside to eliminate any risk of ingestion. When you’re having a BBQ or party, remind your guests, especially children, to not share their corn on the cob with your pup.

There are lots of safe options to give your dog; corn isn’t one of them. Keep this BBQ staple on your own plate and give your dog something a bit more nutritious.