While ants won’t spread disease-causing bacteria like other household pests (such as mice and roaches), it’s the rare homeowner who wants them around. After all, nothing ruins breakfast more quickly than finding ants in your sugar bowl or cereal box. But if you have pets, such as a dog, you can’t exactly spread ant killer around your house liberally, as it can poison your pet. The best dog safe ant killers eliminate your pest problem without harming your pet.

What’s the Risk to Dogs?

According to Cesar Milan, insecticides are among the top 10 household items that could hurt your pup. Ant baits, though plastic packages that contain an attractant inside them, are occasionally eaten by pets.

The baits often contain peanut butter, which dogs love, as well as a small amount of poison. The good news is that the poison in most ant baits usually isn’t enough to hurt or kill your dog.

But swallowing the plastic case the bait is in can cause some trouble. The bait casing could get stuck in your dog’s digestive system or could cause some discomfort as it moves through his body before he passes it.

Although your dog will probably be fine if he or she eats ant poison, it’s a good idea to call your vet if it happens. Another option is to reduce the chance of your dog eating a poison in the first place by switching to a dog safe ant killer.

What to Look for in a Dog Safe Ant Killer

Although it does kill ants and other insects, the FDA considers diatomaceous earth to be “generally recognized as safe.” When looking for diatomaceous earth, choose a product labeled as “food-grade,” which means it’s gone through a purification process.

When scattered about, diatomaceous earth can kill ants and other insects by sucking the fat and oils away from their exoskeletons, according to the National Pesticide Information Center. Ants don’t need to eat the ingredient for it to do its damage.

Diatomaceous earth has several other uses as well, ranging from deodorizing clothing and carpets to cleaning up spills.

Ingredients That Aren’t Safe for Dogs

There’s some confusion over the presence of borax, or boric acid, in some ant killers. People commonly assume that borax is a safe ingredient since it does have a low toxicity, at least for people.

It’s a different story for dogs. According to the ASPCA, borax can lead to irritation and stomach upset in dogs if consumer. If your pet eats a lot of it, there’s the risk of kidney injury. For the sake of your pet, it’s best to just say no to ant killers that contain borax.

An Ounce of Prevention

Often, preventing ants is better than killing them, especially if you have a pet at home. Ants typically come into your home because they are hungry and you have food. According to the Humane Society, if ants come to your house in search of food but don’t find any, they won’t return.

To keep ants away, make sure you store all your food, plus your dog’s food, in airtight, ant-proof containers. Wipe up your counters and tabletops after each meal and wash the dishes. Don’t leave dirty plates and dishes in the sink overnight. Sweep and vacuum the floors to remove any food bits.

It’s also a good idea to use soap and water when cleaning surfaces. The soap will rinse away the chemical trails ants leave, according to Angie’s List. It is also potent enough to kill any ants it comes into contact with.

If you’ve done what you can to keep ants away, but they keep coming back, the next step is to break out the dog safe ant killers.

Harris Diatomaceous Earth Food Grade slices up the exoskeletons of ants, which ultimately kills them. The product is safe enough for humans to eat and won’t harm your pets. It also includes an air pump duster, which is supposed to make application easier.

To use the product, you sprinkle some of it in areas where you’ve seen the ants. If the ants crawl on it, the edges of the diatomaceous earth cut them up.

Along with killing ants, the diatomaceous earth will cause harm to any insect that has an exoskeleton. People have reported that it’s an efficient killer of everything from fleas to scorpions. 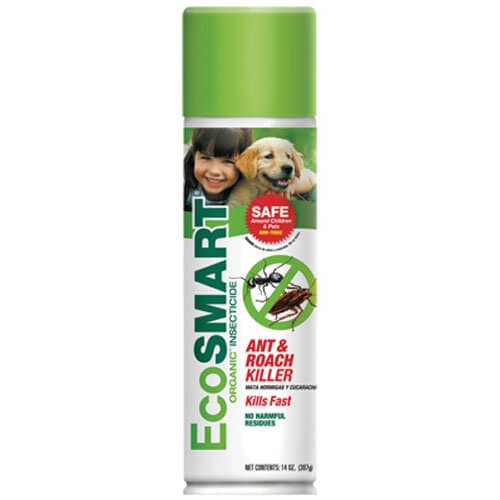 See the latest price on Amazon.

EcoSMART 33103 Organic Ant and Roach Killer contains all-natural, plant-based ingredients. Sold in a 14-ounce aerosol can, it claims to kill ants, cockroaches, silverfish, and a range of other crawling bugs on contact. The active ingredients in EcoSMART are peppermint oil and rosemary oil, two herbal oils that are known to be strong enough to cause serious harm to bugs.

If you’re looking for the best dog safe ant killer, diatomaceous earth the way to go. Although there are plenty of options out there, Harris Diatomaceous Earth Food Grade is the most well-rounded option. You can use it as an ant killer, to kill fleas on your dog and you can use it to deodorize your shoes or carpets.

Are Borax Ant Traps and Borax Ant Poisons Safe To Use Around Dogs?

Borax ant traps are toxic to dogs according to the ASPCA. Boric acid does have a low toxicity level and is also caustic.  Expect consuming these traps to cause stomach upset in pets, so if your dog has a habit of consuming things they shouldn’t, you will want to put these out of reach. If your pet has consumed a Borax Ant Trap or ant trap that uses boric acid, contact the Pet Poison Control hotline.

If your dog eats a Terro ant bait, you should contact Pet Poison Control. Terro ant bait is made with boric acid, so while it isn’t immediately toxic, it is caustic and vomiting should be induced as quickly as possible to avoid any stomach upset.

Discover The Quick And Easy Way To An Obedient Dog WITHOUT Spending Hours Of Training & Thousands Of Dollars! This FREE video series will reveal the method that has your dog CHOOSING to obey you, every time!