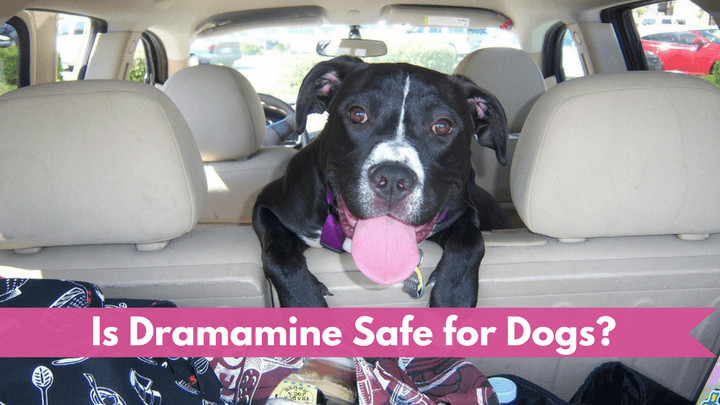 If you’re prone to motion sickness, then you are very familiar with dramamine. Whether it’s roller coasters, boats, or just riding in a car that triggers intense nausea and misery, you know that Dramamine is one of the most effective drugs to treat your symptoms. Does your dog get sick whenever they ride in the car? While this is most common in puppies, some dogs never outgrow their motion sickness, making you desperate to find a cure.

Can I Give My Dog Dramamine?

Dramamine (dimenhydrinate) is safe for dogs if your vet has approved it. It’s safe to treat motion sickness and it’s sometimes used for anxiety, sedation, and vestibular disease.

Is Dramamine Safe for Dogs?

Since Dramamine is not formulated for canines, there are definitely instances where you shouldn’t give it. Pregnant dogs should never have dramamine, and it should be used with great discretion if your dog has liver or kidney disease. While it’s considered safe, the drug can have a variety of minor dog side effects. The most common is sedation. If you’ve ever taken Dramamine, you know that you get intensely tired once it kicks in. The same thing happens to your dog, so don’t be alarmed if all they want to do is sleep. It’s only concerning if they are so sedated that they can’t stand up or they don’t respond to your voice.

Other dogs experience dry mouth, appetite loss, vomiting, and diarrhea. Since you’re trying to eliminate your dog’s discomfort, you should find an alternative drug if it’s causing nausea and vomiting instead of getting rid of it.

How Much Dramamine Can I Give My Dog?

Since this drug is known for its sedative effect, it’s critical that you are giving the correct dose. Always talk to your veterinarian about the best dose for your dog; too small of a dose won’t eliminate nausea, while too large of a dose is going to excessively sedate them.

Dramamine works best if you give it a half-hour before you travel. Their body needs time to absorb the drug, so try to plan your trips around your dog’s Dramamine administration. The most common dose is 4 mg per pound (or 8 mg/kg) three times per day. Of course, if you’re just taking a short trip to the vet, you won’t need to give it three times a day. Giving it every eight hours is only necessary if you’re going on an extended car trip.

As a general rule of thumb, small dogs get 12.4 mg, medium dogs get 25 mg, and large dogs can safely have 50 mg. “Small”, “medium”, and “large” can vary widely in terms of how much they actually weigh, which is why you should talk to your vet about the right dosage for your dog.

What Happens If My Dog Gets Too Much Dramamine?

A serious overdose is dangerous for your dog. If they develop seizures, have difficulty breathing, appear excessively lethargic (not responding to you or any other stimuli), or they’re in a coma-like state, you need to get them to the veterinarian immediately. An overdose can kill them. This is a very avoidable problem if you’ve had the proper conversation with your vet about the safest dose for your dog.

What Can I Give My Dog for Motion Sickness?

If Dramamine isn’t available or safe, there are a few other options. Benadryl (diphenhydramine) is an antihistamine that has anti-nausea properties to it, and some owners have found it helpful in treating mild motion sickness. A more natural solution is ginger. Ask your vet if it’s safe to give your dog a ginger tablet or ginger biscuit before you travel.

On top of medication, there are a few things you can do to alleviate motion sickness symptoms. First, don’t put your dog in the car with a full stomach. When you combine motion sickness with a full stomach, you’re guaranteed to have a mess to clean up when you get home. Don’t feed them for at least eight hours before travelling. If their level of nausea is greatly reduced on an empty stomach, you might not even need medication. Puppies typically outgrow their motion sickness, so don’t despair if they vomit a few times every time they get in the car. They’ll usually outgrow the nausea around six months or so.

Motion sickness is never fun for anyone involved. Canine motion sickness is particularly disgusting, so it’s no wonder that you’re desperate for a cure. Your vet can guide you towards the best remedy and help everyone involved travel without the smell of vomit lingering in your backseat.