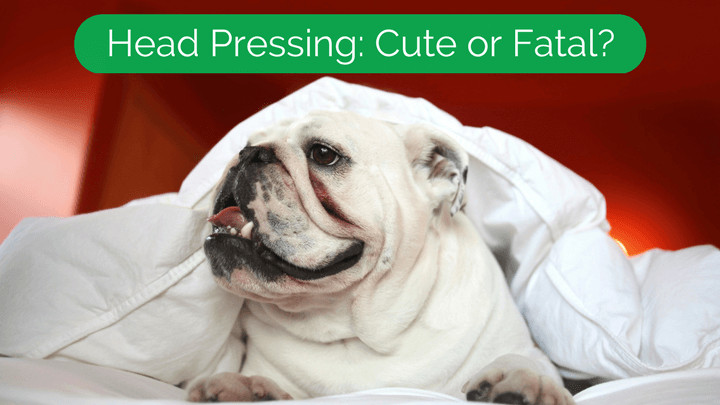 Unless you’re a veterinary professional, there are some dog behaviors that make you question whether they’re normal, quirky, or something that should be investigated by a veterinarian. It’s always better to be safe than sorry, so if your dog starts exhibiting a behavior you’ve never seen before, give your vet a call.

Head Pressing: Quirky or a Sign of Something Serious?

Head pressing is exactly what it sounds like: your dog walks up to a wall or object and puts the top of their head flat against it. They can hold their head there for a brief period of time or they’ll hold it there. There are images floating around the internet making a joke of it, but head pressing is no laughing matter.

What is Head Pressing?

Head pressing is almost always a sign of some sort of neurological trauma or damage. This damage doesn’t have to occur from a blow to the head; it results from ingesting a toxic substance or certain neurological diseases. If you see your dog head pressing, go to the vet immediately. Don’t call and schedule an appointment; they need to be seen right away.

There is a number of causes, but each cause can only be diagnosed by a veterinarian. Here’s a short (but not exhaustive) list.

There isn’t a set list of toxins that only lead to neurological damage, but these items include chemicals and foods (grapes, chocolate, and onions/garlic). Most toxins attack various systems, not just one, so if your dog’s toxicity has progressed to head pressing, it’s likely other systems have been affected.

Liver shunts are most commonly diagnosed in smaller dogs, but dogs of all sizes can develop this disorder. Blood has to pass through the liver to make its complete circulation through the body, but when a shunt is present, the blood has to skip the liver and goes directly into the main bloodstream. Since the liver filters out toxins, the body suddenly becomes overwhelmed with substances that should have been filtered out. When enough toxins build up in the bloodstream, the neurological system is affected. Diagnosis requires bloodwork and an ultrasound.

It’s normal to assume a neurological problem is the result of a tumor, but they’re fairly rare in dogs. Rare doesn’t mean impossible, though, so don’t panic if your vet wants to investigate further. Other symptoms of a brain tumor are seizures, vision problems, hypersensitivity to touch, pain around the head/skull, and mobility issues.

With this disease, the forebrain and thalamus are impacted, resulting in a wide range of neurological symptoms. These can include seizures, behavior changes, damaged reflexes, and pacing/circling.

Encephalitis is when the brain swells for a number of reasons (toxins, head trauma, viruses). Dogs with encephalitis are impacted neurologically and you could see seizures, mobility problems, and severe lethargy.

Infection in the Nervous System

A nervous system infection is rare, but when it occurs, they develop swiftly and they’re very dangerous. Rabies is considered an infection, but if your dog is vaccinated, it shouldn’t be a possibility. Other infections can be parasitic, bacterial, and fungal in nature. They’re often caused by bites from other animals/insects or from exposure to viruses and bacteria. Neurological infections have very high mortality rates if the dog isn’t treated immediately.

Unfortunately, dogs suffer from strokes, too. Canine strokes are caused by blood clots or ruptured blood vessels. Some strokes are caused by cancer, kidney disease, or encephalitis. Other signs of a stroke are staggering, collapsing, rapid eye movement, dizziness, and twisting of the neck and torso. There’s no cure for a stroke, and most dogs deteriorate rapidly after a stroke.

Diagnosing Why Your Dog is Head Pressing

Depending on what your vet expects, diagnosing the reason behind your dog’s head pressing can be difficult. Blood work is always a good start to see if there is any kind of poisoning or organ failure contributing. X-rays, ultrasounds, and other imagery can also pinpoint the cause. Treatment depends on what the cause is, but sometimes supportive care is all that can be done.

Your dog pressing their head against the couch may look like simple frustration, but it’s far more insidious than your dog just being silly. No matter what, your dog needs to be seen by a vet immediately. Outwardly it may not seem like a huge deal, but neurologically, something very serious is going on.