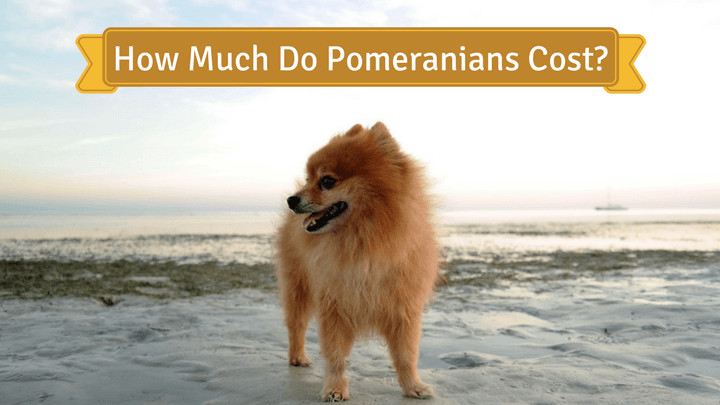 According to the American Kennel Club (AKC), the spunky little Pomeranian ranks as one of the most popular dog breeds in the United States. These spitfires are known for their loyalty and larger-than-life attitudes wrapped up in a tiny package. If you’ve been considering adding a Pomeranian to your family, it’s important to know the basic costs of owning and caring for the breed.

Purchasing a Pomeranian is often the largest upfront cost barring any emergency veterinary bills. The costs vary widely depending on where/who you get the puppy from.

One of the most expensive places you can purchase a purebred puppy is from a pet store. These puppies are often very unhealthy, riddled with a host of genetic problems, and have shorter lifespans than a puppy raised in a healthy environment. All puppies from pet stores come from “puppy mills” where dogs are kept in horrific conditions with bare minimum care. It might be tempting to “rescue” the little fluffball in the cage, but not only will you pay an exorbitant cost, you’re helping financially support the abuse of thousands of dogs across the country.

Getting a Pomeranian from a reputable breeder is going to ensure you’re getting a healthy puppy. There’s no set cost, but the purchase price can start at several hundred dollars and go up to several thousand dollars for a show-/breeding-quality puppy. Like many other things in life, you get what you pay for. Cheaper puppies are likely to be raised by less-than-stellar breeders. Despite being a tiny little dog, the price of getting a puppy from a reputable breeder usually costs between $600 and $2000.

If you want an adult dog, rescues are a fantastic place to adopt from! Often these dogs are already well-trained and they’re spayed/neutered, up to date on their vaccines, and come with an honest health report. Rescues typically charge adoption fees based on how much they needed to give the dog proper veterinary care, but you can expect their adoption fee to be several hundred dollars.

The Basic Cost of Care for Pomeranians

Aside from the purchase of your dog, you’ll have veterinary and food costs, too. Pomeranians aren’t exactly big eaters, but they do require regular veterinary care.

When you get your puppy, you’ll need to keep up on their puppy series of vaccinations to prevent them from getting sick. Depending on how old your puppy is (they usually get three sets between 6 and 16 weeks of age) will dictate how much you spend on vaccines because the older they are, the fewer vaccines you’ll have to pay for. On average, most owners pay between $75 to $100 to finish the vaccination series. It could be less (or more) if your vet charges for an exam every visit or you need more vaccines (leptospirosis, for example).

If you have a male Pomeranian, it’s incredibly important to get them neutered before their six month birthday to prevent territorial marking. Toy breeds are famous for being difficult to housetrain, and if you can get your male neutered before he starts lifting his leg, your carpet will thank you. Beware, too, that small dogs commonly have retained testicles which increases your surgical costs. An average, complication-free neuter typically runs between $100-150 on tiny dogs.

Females should be spayed before their six month birthday to avoid them going into heat. Research shows dogs spayed before their first heat cycle are significantly less likely to develop deadly mammary cancer. A spay surgery usually runs between $120 and 200 on small dogs.

Small dogs are notorious for having bad teeth. No matter how good their diet is or how often you brush their teeth, toy breeds need annual dental cleanings from their veterinarian. A complete dental scaling requires general anesthesia, so while a dental cleaning isn’t necessarily exorbitant in cost, it isn’t exactly cheap. If your Pomeranian’s teeth aren’t very bad, a minimal scaling plus anesthesia might cost around $200. If their teeth require extensive cleaning and extractions, your bill will probably climb over $400. You’ll save money if you schedule their cleanings once a year (twice if they have particularly bad teeth).

Pomeranians are frequently born with luxating patellas which means their knees pop in and out of place. Some luxations are managed with anti-inflammatories and modified activity, but many dogs need to have them surgically repaired to keep them pain-free. These surgeries aren’t cheap, and they should ideally be performed by a vet experienced in orthopedic procedures. You can expect a surgery to repair one leg to run you between $1500 and $2000.

Your little fluff ball might seem like he’s nothing but hair, but under all of that fuzz is skin that’s susceptible to dryness. This is usually caused by poor grooming habits (they need to be brushed regularly), too many baths, and blow drying (at home or by groomers). It can also be due to food allergies. Sometimes it’s a temporary problem, but a lot of times it’s a chronic issue requiring medications, special shampoos, and limited ingredient foods. This can add up to an extra $50 or more dollars per month.

Pomeranians don’t eat much, but they should be on a good quality of dog food. If you can buy it in the supermarket, then it’s not considered a good food. It’s important to keep them at a healthy weight since they’re already predisposed to joint problems. Since a Pomeranian eats less than a cup a day, even a higher-quality dog food won’t set you back more than $20 or $30 a month.

This isn’t necessarily a necessity because you can learn to groom at home, but a lot of owners don’t have the time to frequently groom their hairy little dog. Grooming costs around $40/session and dogs can go up to six weeks before they need to be groomed again.

Pomeranians are pretty low maintenance. If they’re fed, hugged, and allowed to sleep on your bed, then you’ll have a very content Pomeranian. This tiny breed can live upwards of 15 to 16 years, so ensuring you’re giving them the best care possible will prolong their lives as long as possible.