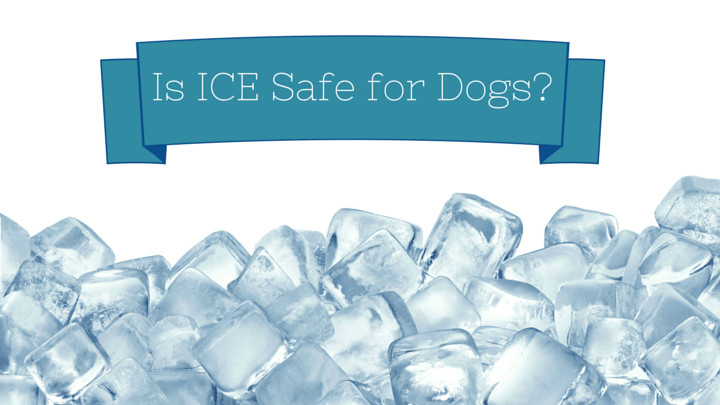 Is there anything better than a tall glass of ice water after a sweaty workout? Whether it’s a glass of warm water with lemon to flush your system or a chilled bottle of spring water, your body soaks it up. Do you like to give your dog ice water after a long playdate at the dog park? Does your pup come running into the kitchen whenever they hear the ice dispenser?

There has been a lot of conflict about whether or not ice water and ice cubes are safe for your dog, so perhaps you’re hesitant to give your dog anything other than lukewarm water to drink. If so, follow some of these tips to keep your dog safe.

Are Ice Cubes Safe for Dogs?

Some dogs go nuts for the crunch of ice. It’s fun to play with, too! Giving your dog an ice cube to chase around the kitchen awakens their predatory instinct and they get the same thrill as when they’re chasing a squirrel around the backyard. While it’s fun, there aren’t really any significant health benefits to ice.

It hydrates your dog and provides a fun treat, but there’s no reason that your dog needs ice in their diet. However, it is a good alternative to commercially produced treats if your dog is overweight or on a restricted diet due to allergies or digestive issues.

If you give your dog ice cubes, limit it to one at a time and monitor them closely. It probably isn’t a good idea to give your dog ice if they’re prone to swallowing their treats whole because they can easily choke on ice cubes. Don’t give them ice that has that sticky texture to it. It can burn their sensitive tongues.

Puppies shouldn’t be given ice because their puppy teeth are still fairly fragile and they can easily break chewing on things that are quite hard. Give smaller breed dogs crushed ice instead of whole cubes to prevent damage to their tiny teeth.

There’s a rumor floating around the internet that claims ice water can kill dogs. Someone gave their dog a bowl of ice water, the dog drank it, and then their stomach bloated and they died. When these types of stories go around, they’re usually based on misinformation, not facts.

To break this down, you’ll need to know what “bloat” is. Medically known as gastric dilatation and volvulus (GDV), this is a very dangerous condition.

It’s most commonly diagnosed in deep chested breeds like German shepherds, standard poodles, and Labradors. It occurs when the stomach fills with air, dilates (or bloats), and then twists over on itself, cutting off the circulation to the stomach.

Untreated, it’s always deadly. There are typically two stages; the first is when the stomach bloats with air. If it continues to progress, the stomach will rotate and then it has to be surgically corrected.

You can’t always tell your dog has bloat by their abdomen. Some dogs will look significantly distended in their abdomen, but it’s hard to see this in obese dogs or dogs who are more rotund in shape.

A bloated stomach is extremely uncomfortable, and dogs will appear very anxious. They won’t lay down, and they’ll pace because they can’t get comfortable.

They may pant because of the discomfort, and a lot of dogs will cough up white foam. If they try to drink, they’ll vomit it up immediately, especially if the stomach is twisted.

Their gums will be pale in color because of decreased blood flow (normal gums should be bubblegum pink). Their heart rate will also be very high and they will have difficulty breathing.

If you suspect your dog has bloated, do not wait to go to the vet. Even if they aren’t showing all of the above symptoms and their abdomen doesn’t appear bloated, they need to be seen right away. The longer it progresses, the more likely it is your dog can’t be saved.

Your vet will much rather take an x-ray and see a normal stomach than go into surgery on a dog who’s too far gone to save.

The exact causes of GDV aren’t known. Genetics and anatomy are partially to blame, which is why the deep chested breeds are more prone to bloating. Dogs with a first relative who have had GDV are at a higher risk for bloating, as are older dogs.

Dogs who eat or drink very quickly can develop bloat because they inhale a bunch of air with their food or water. Too much activity after eating a meal is thought to contribute to GDV, as can drinking water immediately after intense activity.

So Will Ice Water Cause Bloat?

The general consensus with veterinarians is no, ice water is not the cause of GDV. What most likely happened is the dog who bloated was probably given a bowl of ice water after they got done exercising and they were already panting.

They quickly drank the water, inhaling a bunch of air as they drank, and then continued to pant after they finished.

When you combine these factors, it’s simple math. The dog inhaled too much air with their water and then their stomach bloated. It probably would have happened whether the water was iced or room temperature.

If your dog has just finished exercising, limit how much water they can drink. Don’t fill their bowl and let them drink it all in one go. Small amounts over a period of time are better than an entire bowl at once. The same goes for eating.

Don’t feed your dog then drive to the dog park and play fetch, and don’t give your dog their meal immediately after they exercised.

Spacing out mealtimes with playtime will greatly reduce their risks. If your dog is an “inhaler” (meaning they eat their food very quickly), you can buy specially made bowls that force dogs to pick around for their food so they eat more slowly.

There are many things that aren’t safe to give our dogs, but ice and ice water are quite safe if given with discretion. If you’re ever worried about the safety of anything you give your dog, utilize your relationship with your veterinarian and ask their advice.