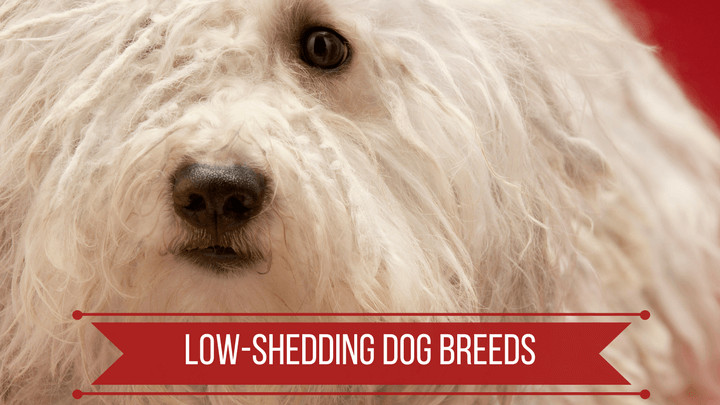 Most dog owners are completely resigned to the fact that they’re going to be covered in dog hair. Black clothes are out of the question, and if you’re going out in your dressy clothes, you have to dart straight from the bathroom to the car to avoid being covered immediately in hair. While this is simply a part of owning a dog for many people, others don’t want to clean up dog hair or they have allergies that prevent them from having a shedding dog. While no dog is truly shed-free (you shed as a human!), there are a handful of breeds that shed very minimally.

The Bichon Frise breed is the epitome of cute and fluffy. The breed was a favorite of aristocrats in 14th century Europe but was turned out to the streets when dog “fashion” changed. The Bichon Frise wasn’t officially recognized as a breed until the 1930s. Their coat is soft, thick, and slightly curly with very minimal shedding. It does require regular grooming, so if you don’t have time to devote to consistent grooming appointments, the Bichon isn’t right for you. These dogs are excellent with children, other pets, and are a great choice for homes without yards. At their largest, the Bichon Frise is only 11 inches at the shoulder and 11 pounds.

If you have your heart set on a cute white dog but you don’t want to commit to the grooming, then the West Highland White Terrier (aka the Westie) could be the perfect choice. Originally bred in Scotland to be small game hunters, these terriers are known for their loyalty, athleticism, and bravery. Westies remain fairly small, only reaching 11 inches in height and they weigh between 13 and 22 pounds. Their coats are snow white, dense, and require twice-weekly brushing and hand stripping every three months. The breed does better with an active family without young children because they still retain their innate chase drive.

The Portuguese Water Dog became incredibly popular when the Obama family adopted the breed early in their first term. The reason they chose the breed was because they shed very minimally and they’re considered a low-allergenic dog, making this breed a popular choice among families with allergies or asthma. The coat is very thick and curly, so it needs brushing a few times a week and clipped a couple of times a year. This is a very active dog and would do best in a family that can give it daily exercise and a fenced yard. They were bred to be in the water, so it isn’t likely that you’ll find a Portuguese that doesn’t love to go for a swim in the lake or river. The breed is medium in size, weighing between 35 and 60 pounds.

This breed didn’t spike in popularity until 1932 despite 200 years of catching rodents in Ireland. Their coat is very soft and wavy but sheds very little if it’s well maintained. Because it’s longer in length, the coat should ideally be brushed every day. When the breed first became standardized, their coat was kept completely natural, but most breeders and showers keep the coat clipped short on the body with a beard on the muzzle. The Wheaten stands about 18.5 inches at the shoulder and weighs between 35 and 40 pounds. Because they are a terrier, they do require moderate exercise. If you don’t have a yard, your dog will probably want to be walked a couple of times a day to stay happy.

Most of the low-shedding breeds have medium coats, but the Whippet is one of the few that is short coated. Often seen as a small or miniature Greyhound, the Whippet is quite dainty. They have very long legs and a sleek, deer-like build because the breed originated as a hunting dog. They typically don’t grow any taller than 18 inches tall and 15 to 30 pounds in weight. Like their Greyhound counterparts, they’re very calm indoors and are quite content to lounge around. However, when they’re outside they do love to run, so a fenced yard would suit the Whippet the best. Their short coats require very minimal care, requiring a brushing only a couple times a year.

The name may sound like it’s referring to a lizard, the Komondor is basically a dog disguised as a dust mop. Their coat is quite unique and looks like dreadlocks when it’s properly cared for. The fur is very wooly in texture and mats easily. The hair needs to be “corded” very regularly to avoid painful mats. The coat protected the dog when the breed was used as police dogs or to protect flocks of sheep from predators. The thick, heavy coat was quite effective at protecting the dog from injury. Grooming is very labor intensive; at the very minimum, you can expected to spend at least two hours every week separating and re-cording their hair. When they require a bath, it can take three days for them to dry, and the coat cannot be corded until it’s completely dry. They’re a very large dog, weighing in between 80 and 120 pounds and standing 27 inches in height.

Originating in England, these tan and black dogs are presently used for hunting, obedience, and agility. For the casual dog owner, they are very good pets, remaining accepting of strangers while still being protective. They are the largest terrier in the breed group, standing tall at 27 inches and weighing between 40 and 60 pounds. They’re very good with children but need to handled firmly until they’re well versed in obedience. Their coat is wiry in texture and dense, requiring daily brushing and regular clipping to avoid mats.

Many people are surprised to learn that there is actually a Giant Schnauzer and not just the little miniatures that most owners have. They were bred in Germany as watchdogs for herds of sheep and goats. As their name indicates, they’re a very large dog. They typically grow to be between 23 and 27 inches tall at the shoulder and top out around 100 pounds. Their coat is not considered soft by any means. It’s very dense and coarse in texture with a soft undercoat. They require weekly brushing and grooming around the eyes and ears every six weeks.

Irish Water Spaniels are often confused with Poodles because of their ringlets, liver color, and smooth face. They very shed very little but require their coat to be brushed and detangled three times per week. While their grooming may be fairly labor intensive, their personalities are delightful. The breed is often described as being goofy or clownish, and they’re very loyal to their family members. They do require regular exercise but are a great size for families living in smaller quarters. They grow to be 21 to 24 inches at the shoulder and weigh from 45 to 65 pounds.

The sleek Saluki looks very much like a Greyhound with longer hair, but Salukis were originally bred in Egypt to course animals like foxes and gazelles. They were treasured by Muslims as gifts from Allah. Their coat is very smooth and soft and only needs to be brushed once a week. The coat variety with feathering on the legs and ears may need to groomed a bit more often depending on their lifestyle. They’re very tall at 28 inches but only weigh between 40 and 60 pounds despite their height.

When you’re looking for a dog that doesn’t shed, don’t assume that you have to choose a breed that requires a large grooming budget. There are plenty of breeds out there that are low maintenance in grooming but brimming in personality.