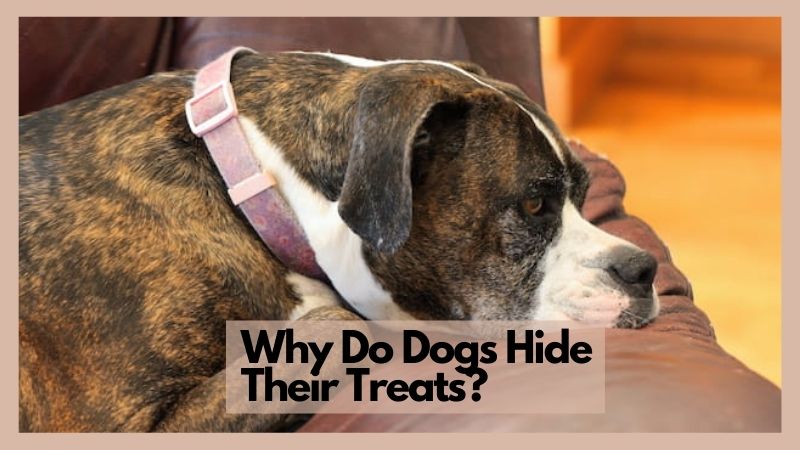 Have you ever pulled the couch back for spring cleaning, only to find your dog’s half-chewed bones? Or is your backyard a boneyard? This may lead you to wonder, why does my dog bury food? It’s common for dogs to hide not only their toys but also their treats. What’s more, this cute yet annoying behavior has a hidden meaning behind it.

Dogs often exhibit strange behaviors, like, getting the zoomies, eating poop, and sniffing their butts. While many of these strange behaviors are completely normal, others, such as hiding their treats can also be a sign of a health condition.

Table of Contents hide
Reasons dogs hide their treats
Why Do Dogs Run Away with Treats?
Why Does My Dog Bury Their Treats?
How to Curb Hiding Habits
What NOT to Do to Stop Dogs from Hiding Things

Before dogs were domesticated, they would bury their excess food in the wild, storing it away for later and keeping it out from the reach of other animals. Dogs are descendants of wolves, and their wolf instinct compels them into hiding their things, they feel that they’ll need for later. This may even include your most comfy shoes, favorite pair of socks, sweatshirt and maybe even your tv’s remote.

Though, there’s nothing to worry about because this instinct is quite normal. Especially if your furry friend shares a space with other dogs, they may feel the need to compete for food and hide their most prized possessions. However, dogs living with no four-legged roommates may also show this behavior, simply out of instinct. While your dog may not need to hunt or compete for food, the instinct is still there.

Anxiety is dogs can present in many forms. Dogs hiding their food is a sign of negative experiences or underlying trauma from their past. Puppies coming from backyard breeding may often have to compete with others because of limited food resources.

Similarly, even after these dogs are rescued, they may feel the need to compete for food, treats and toys, especially if they’re housed with other pets. This hiding of goodies to keep it away from other pets is also a sign of underlying stress or anxiety. the behavior may resolve once the dog realizes that they’re in a safe home environment and will be fed regularly.

If your pet is suddenly disgusted by food, and has other symptoms of vomiting, diarrhea, and lethargy they may be ill. However, “air burying” doesn’t necessarily mean that it’s time to take a trip to the vet. Your dog may just be a picky eater or having a difficult time adjusting to a new diet.

Hiding treats can also be a sign that you are overfeeding your doggo. They may hide their treat away for later if they don’t want the treat that you’ve given them. This is healthy behavior. Commercial diets are often misleading regarding the amount of food your dog needs each day.

However, raw, and homemade diets are free of fillers which means your dog will get the nutrients it needs with less food. Be mindful of how much you’re feeding your dog and be careful to not overfeed them. While some dogs would just hide the food for later, others may eat it anyway which can later lead to obesity. If you need help about how much your dog should be eating, consult your vet.

While some dogs are innately possessive, others tend to become more possessive if they are living with other pets. They may hide their most prized possessions, in this case, treats, either behind the sofa, under the blankets or the dirt in your backyard. This behavior, as mentioned above, is a sign of an anxious dog – they’re worried that there’s not enough food.

Your socks, your new shoes and even the tv’s remote control are your dog’s most prized possessions because these items belong to you. Dogs stealing and burying items that belong to family members means that they want more attention. For our furry friends, negative attention is better than no attention at all.

Therefore, just like children, they will act out with this somewhat annoying behavior when they are feeling neglected. In doing so your dog may also be putting themselves in harm’s way because they may end up swallowing the stolen item. Set aside 20 minutes for some one-on-one time with your dog or take them out for a walk to keep your dog from hiding your things.

Why Do Dogs Run Away with Treats?

If your dog is running way with their treats, then it’s probably because they are being eaten by another pet. If you live in a household with many pets or have children around, your dogs may find them as competition. And therefore, run off with their food to make sure that it’s not eaten by anybody else.

Sometimes, dogs even see their owners as competition even though you’re the one giving them the food. Again, although strange, it’s all a part of their natural instinct.

Why Does My Dog Bury Their Treats?

Dogs bury their treats because it’s a natural inbuilt instinct. Before dogs were domesticated, they lived in the wild where they would store away their excess food either for later or to save it from other animals.

How to Curb Hiding Habits

If you think your dog is displaying constant signs of anxiety, speak to your vet. And if they agree that your dog is anxious, depending on the type of anxiety they are struggling with, there are a few options that can help relax your dog.

What NOT to Do to Stop Dogs from Hiding Things