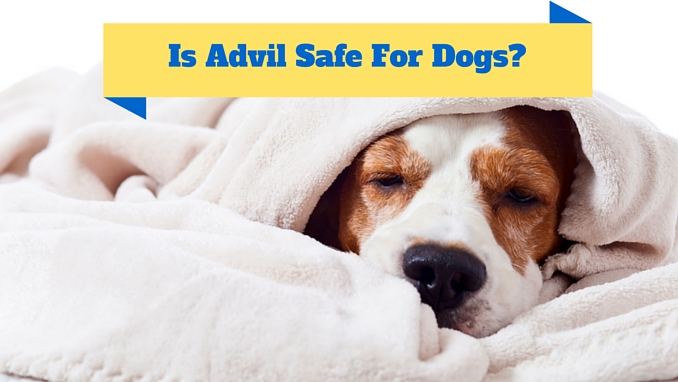 When your head is pounding or your back is screaming in protest, you can stop at any corner store and get some pain pills to help ease the discomfort. If your dog is in pain, your options for relieving their discomfort are much more limited. There’s nothing over the counter that you can give your dog without serious repercussions on their health, so you should never give them anything you would take for your own pain.

Table of Contents hide
Is Advil Safe for Dogs?
So, What Can I Give My Dog for Pain?
Treatment for Advil Toxicity in Dogs
Can Dogs Take Other Kinds of Ibuprofen?

Is Advil Safe for Dogs?

Advil consists of ibuprofen, which is extremely toxic to dogs. Under no circumstances should you ever give your dog Advil. Advil toxicity is fatal if it’s left untreated.

The ibuprofen in Advil specifically targets the liver and kidneys. When your dog first ingests Advil, they’ll present with symptoms that aren’t very alarming. In the early stages of toxicity, your dog will just have an upset stomach with vomiting and diarrhea. They’ll lose their appetite or be unable to keep any food down. As the toxicity progresses over the next few hours, the more serious symptoms start to appear.

Ibuprofen is known for causing stomach irritation, as well as stomach ulcers in dogs. Dogs who have eaten a significant amount of ibuprofen will often develop very serious stomach ulcers. If your dog starts vomiting blood or their stool looks black and tarry, that is a good indication that an ulcer has developed. Ulcers aren’t just painful; they can be deadly. If an ulcer completely eats through the stomach, the contents of the stomach will spill into the abdomen and create a very swift, severe infection that will rapidly kill your dog if they aren’t treated promptly.

When the liver is affected, your dog will show a few different symptoms. The first one to appear is usually jaundice, and their gums, skin, and eyes will take on a yellowish tinge. The urine might become very dark in color, as well, appearing to be almost orange or blood red. Because the liver helps produce hemoglobin, which is responsible for oxygenating the body, it’s not uncommon for dogs with liver damage to become short of breath.

If the kidneys become affected, your dog will become a very aggressive drinker, insisting they’re thirsty even after they’ve gulped down an entire bowl of water. They’ll get up in the middle of the night begging for water or sit by their empty bowl all day until you refill it. Accompanying this increased thirst is increased urination. However, if the kidneys are severely damaged, they might not produce any urine at all.

Other signs of ibuprofen toxicity are seizures, weight loss, muscle tremors, incoordination, or coma. Death is the final, and ultimate, symptom.

So, What Can I Give My Dog for Pain?

Your vet has a slew of dog-safe medications available to treat pain of differing degrees. A lot of people don’t realize things like Advil don’t treat pain in dogs. The pain receptors in their brains aren’t affected by Advil, so you’re only giving them a medication that’s both toxic and ineffective.

Dogs that have very minor pain due to things like the beginning stages of arthritis could benefit from natural anti-inflammatories. Dogs that are very active and athletic would also do well with some of these remedies. You can add certain herbs or ingredients into their dog food or concoct dog treats with these ingredients. Before you give your dog any of these, however, you need to consult with your vet. While the ingredient might be generally regarded as safe, that doesn’t mean it’s safe for every dog.

Fish is fantastic for reducing inflammation. Sardines are very good for your dog, and they’re extremely high in omega-3 fatty acids. Anchovies are also quite beneficial for creaky joints, as are salmon and striped sea bass. Salmon and sea bass should always be cooked to prevent parasitic infections.

The fatty acids and choline found in organic pasteurized eggs have been linked to a decrease in joint inflammation. Eggs are safe for your dog raw or cooked, but you should limit them to one or two eggs per week. Extra-virgin olive oil contains compounds that stop the production of inflammatory chemicals, and it’s safe to add a couple of teaspoons to your dog’s food.

Some dog food manufacturers are using filler ingredients like blueberries, mangos, apples, and whole grains, all of which are responsible for reducing inflammation.

Treatment for Advil Toxicity in Dogs

Generally, the more quickly you seek treatment, the better chances your dog has to escape their overdose unscathed. If it’s been less than two hours (and that’s being generous) since your dog has eaten advil, your vet can induce vomiting with something called apomorphine. They may administer activated charcoal by mouth to absorb any remaining drug in their system. Depending on how much advil your dog has ingested, gastric lavage (pumping the stomach) could also benefit your dog.

In the unfortunate event your dog’s kidneys have been affected, hospitalization is very necessary. Fluid therapy will help the kidneys work less and restore any function that’s still remaining. Liver damage may require blood or plasma transfusions to replenish the damaged red blood cells. If your dog has developed a stomach ulcer that has perforated due to advil ingestion, surgery is the only option to save your dog’s life, followed by intensive IV antibiotics.

Can Dogs Take Other Kinds of Ibuprofen?

Advil isn’t specifically toxic to dogs; it’s the ibuprofen in it. Any medication that contains ibuprofen is deadly to your dog. Always store your medications in a safe place where your dog can’t possibly access them.