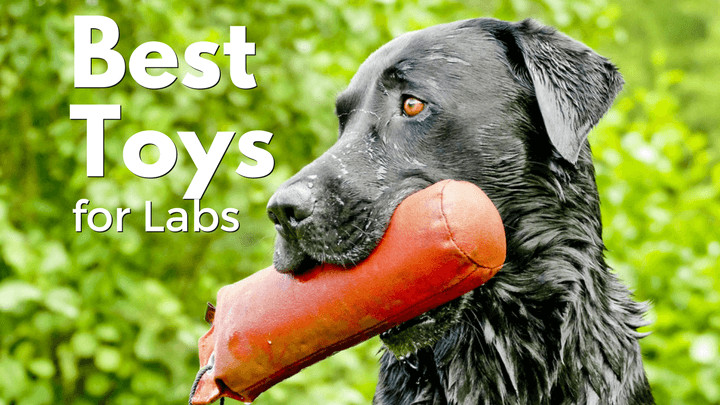 Experienced Labrador owners agree that their Labs don’t officially outgrow their puppy phase until well into their senior years. This ebullient, loyal breed is a perfect fit for most families, but it’s important you give them plenty of entertainment. Exercise is the first step, but they also love to play with toys. Because they’re a retrieving breed, most Labs love to play fetch with balls and tear up squeaky toys. What are the qualities you should look for in toys for your Labrador to ensure you’re buying things that last?

The Best Kinds of Toys for Labs

The perfect toy is different for every dog. Some Labs go absolutely nuts for balls, and others are at their happiest when they’re pulling the stuffing out of soft toys. Other dogs don’t discriminate at all; they play with anything you give them. If you have a Lab with standard Lab tendencies, there are a few types of toys that are more likely to get plenty of enjoyment from.

Rubber Toys Are Great For Labs

Rubber is by far the most durable material, lasting for months or even years. Because the rubber is so tough, you don’t have to worry about it getting destroyed during a rousing game of fetch or tug-of-war or finding pieces of it around the house. Heavy chewers often have a hard time destroying solid rubber, so if they can’t keep a toy intact for more than a day, definitely give rubber a shot. There are solid rubber toys, and then there are variations where they’re hollow so you can stuff them with various goodies.

Balls are amazing for Labs with a high retrieval drive. If you live by water and your dog adores playing in it, a tennis ball is the perfect water toy. Balls made for dogs don’t last very long, unfortunately, but tennis balls (made specifically for the sport) are actually really durable! Labs that like squeaking balls would do better with dog-specific balls, though.

Soft toys are generally fine as long as your Lab doesn’t like to eat the dissected pieces and stuffing. These are popular with most dogs because they squeak, they’re easily manipulated, and all dogs get satisfaction in killing the squeakers. Just monitor your dog whenever they’re playing with them. Soft toys aren’t the best thing to leave with your Lab when you’re gone for an extended period of time. Cotton stuffing seems harmless, but it easily causes obstructions in the intestines when it’s eaten in large amounts.

Types of Toys Labs Should Avoid

Everything that’s destructible is dangerous to some extent, but there are types of toys that should be avoided because the risks associated with them are so high.

Rawhide is a big no-no. They’re so popular among dog owners that it’s hard to believe they’re actually pretty dangerous! The biggest danger is choking. When rawhide gets wet, it gets gooey and stringy, but it’s hard to break down. Dogs manage to break the rawhide off in fairly large pieces, and those pieces are too big to pass through the esophagus safely. Larger pieces that manage to make it through the esophagus can get wedged in the intestines, creating an intestinal blockage.

Salmonella contamination is another big risk, and if the rawhide is contaminated, you’re at risk for contracting the illness, too. Salmonella requires hospitalization and antibioitics, and it has the potential to be deadly in puppies and senior dogs.

Rope toys are enjoyable and relatively long lasting, but they carry the risk of creating intestinal obstructions or a condition called intestinal intussusceptions (the intestines fold in on itself). As the rope gets chewed and played with, it starts to break down and the strings start to come loose. A few strings won’t cause any issues, but when your Lab eats numerous strings, they ball up in the intestines. An obstruction and intussusception both require emergency surgery in order for your dog to survive. If you feel like you must give your dog a rope toy, immediately replace it when it starts to fray.

Deer, elk, and moose antlers have soared in popularity as a dog treat or toy. Dogs love the smell associated with the antler, and when they chew it down enough, they’re rewarded with the tasty marrow inside. You’d be hard pressed to find a Lab who wouldn’t love an antler to chew on, but the antlers are so hard that your dog runs the risk of cracking one of their teeth. Antlers are fine for the gentler chewers, but enthusiastic chewers are going to get a bit too aggressive and end up breaking or cracking a tooth. This type of toy requires close monitoring.

Labradors are easygoing enough that anything they’re allowed to play with will be loved and used extensively. Take the time to provide your dog with safe play options that suit the innate instincts of the Labrador breed to keep them both happy and healthy!