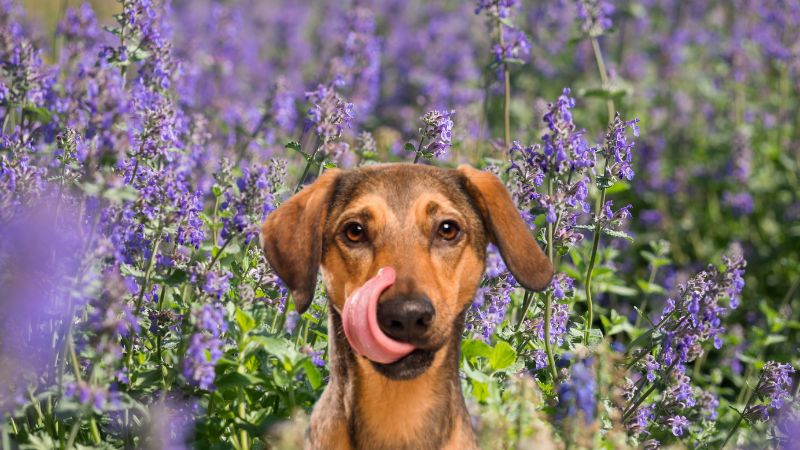 Table of Contents hide
Can Dogs Get Buzzed on Catnip?
Catnip and Dogs
Do Dogs Really Need to Get “High”?
What’s This About Anise for Dogs?
Remember That Dogs Are Gross
So Are There Any Alternatives?

Can Dogs Get Buzzed on Catnip?

If you’ve ever spent any time on social media, you’ve seen the funny memes and pictures depicting the effect catnip has on cats. From being passed out next to catnip plants or a driveway filled with blissed out kitties, cats certainly don’t suffer any ill effects from this curious little herb. Can the same be said for dogs?

Catnip leads to some feline antics that make you absolutely crazy with laughter, but these effects can’t be reproduced in dogs. The mechanism that causes the “stoned” behavior in cats doesn’t work in a canine’s brain quite the same way.

Have you ever seen a cat when they smell catnip? They roll around in it, smell it, eat it…anything to get it in or on their bodies. Even big cats like tigers and lions aren’t immune to the euphoria catnip seems to produce in all kinds of felines.

When dogs are presented with catnip, they’ll probably smell it to get a sense of what it is, but that’s about as far as it goes. There isn’t any proof that dogs get that same sense of bliss that cats do. It certainly isn’t dangerous to your dog if they get into your cat’s stash; the biggest danger is your cat smelling it on their canine counterpart and demanding to know where theirs is!

Do Dogs Really Need to Get “High”?

In the veterinary circle, there’s a term called “dog joy”. It’s used to describe the insatiable joy dogs exude every day. Whether it’s you walking in the door from getting the mail or letting them up on the couch on movie night, everything makes dogs ecstatically happy. The same definitely can’t be said for cats. Between the two species, cats are definitely the grumpier half. Perhaps that’s why it’s so funny to see cats go absolutely crazy over their catnip?

What’s This About Anise for Dogs?

Many internet sources say if you want to give your dog the same high cats get from catnip, then you should give them anise. This herb smells like black licorice and has a very powerful smell. If you’ve had Italian cookies, you’ve probably tasted anise. It’s used in greyhound racing to scent the rabbit, too. While many dogs do get a buzz from anise, the ASPCA and its veterinarians don’t recommend giving it to dogs. Because it’s so potent, it’s prone to causing stomach upset. In large quantities, it causes central nervous depression, making your dog extremely lethargic, unresponsive, and overall sluggish.

Remember That Dogs Are Gross

Cats are a bit more fussy with what they think smells good, but dogs think even the most disgusting smells are something sent straight from doggy heaven. While there isn’t technically a “catnip equivalent” for dogs, do they really need something that sends them into a state of complete joy? From rotten food to nondescript things laying on the sidewalk, everything smells wonderful to your dog. If you’re looking to make them happy, remember the stinkiest items produce the best reactions.

So Are There Any Alternatives?

If you’re absolutely set on getting your dog “high”, don’t. Altering your dog’s state of consciousness doesn’t serve any purpose except to entertain you. While they may seem like they’re enjoying themselves, purposely getting them buzzed isn’t the nicest thing you can do for your dog. Give them a dollop of peanut butter, fill a hollow rubber toy with some spray cheese, or let them roll in something gross at the lake. All of these will make your dog incredibly happy–and keep them “drug” free!