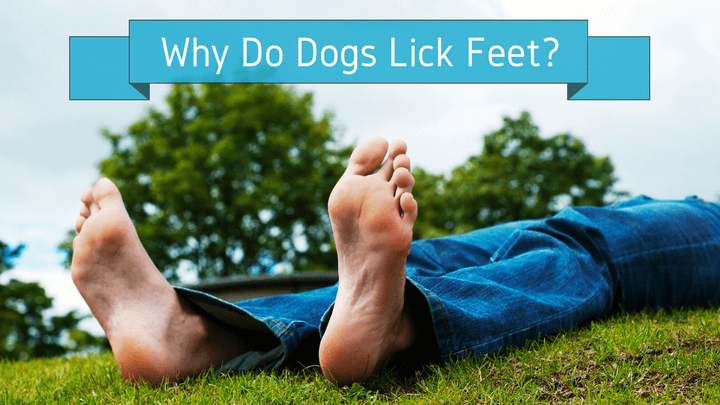 Dogs can be pretty gross. If you’ve had a dog for more than 20 minutes, you’ve surely seen them do some pretty repulsive things. While we cringe when they’re rolling in something mysterious and brown, a dog has a very different idea of what smells and tastes good.

Why Do Dogs Lick Human Feet?

There are a few different reasons why your dog likes to lick your feet. The most common reason is submissiveness. Some dogs use licking as a way to show they know they rank lower than you and they’re happy to be in that role.

Other dogs lick for attention. Whether it’s your hand, face, or feet, this is a gentle but persistent way to get you to pay attention to them. Sometimes it’s because you’re late giving them breakfast, and other times it’s because you’re a bit too engrossed in Facebook and they’re trying to break you away from it. It’s usually a last-ditch effort, meaning they’ve tried other ways to grab your attention but they haven’t worked.

Stressed out dogs occasionally become obsessive and this manifests as compulsive licking. Licking releases endorphins that relax and soothe them. They may lick their own feet, your feet, the furniture, the floor, or their toys. Most stressed out dogs pick one item to focus on, and it can be a really hard habit to break once it’s instilled in them. If they’ve picked you to lick, it’s probably because the smell and taste of you (wherever they’re licking) is comforting to them.

On a sweeter note, your dog could be licking because they’re showing you they love you. There are many reasons dogs like to lick, but affection is a common reason for this behavior. Dogs will lick toys, other dogs, cats, humans, and anything else they’re affectionate towards.

Lastly (and a bit more grossly), dogs lick feet because they like the taste. Whether you unknowingly stepped on some food while cooking or your feet having been sweating, your dog enjoys whatever taste you happen to have on your feet.

What About Human Pheromones?

Some species of animals release pheromones through their feet, and humans happen to be one of them. These are the same type of pheromones excreted in canine urine to mark their territory. If you’ve seen your dog lick where another dog has urinated, it isn’t because they’re gross; they’re using the receptors on their tongue and nose to process the information. It’s likely they’re doing the same thing when they smell or lick your feet. Some science has indicated that clues to our moods are secreted through pheromones. Your dog is pretty good at reading body language, but they could be trying to investigate further by giving your feet a lick or two.

There’s really no way to know exactly why your dog likes to lick feet, but if obsessive licking is getting in the way of their quality of life and becoming a chronic impulse, then it’s time to see if there might be a medical or serious behavioral problem that needs to be addressed.