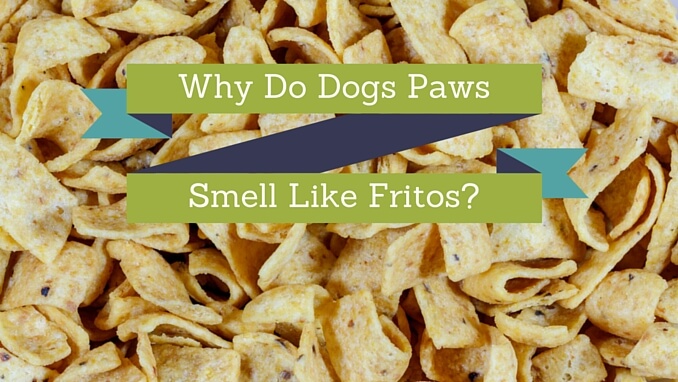 Depending how much of a crazy dog person you are, you might disagree when someone says dogs smell good. They certainly have a variety of odors that smell good or bad depending where it’s located on their body. Have you taken a whiff of your dog’s paws before, though? They have their own odor, and there seems to be a 50/50 split on whether those sweet little paws smell like corn chips.

My Dogs Paws Smell Like Corn Chips? Say What?

What’s With the Fritos Smell?

Unless the smell of corn chips is unbearable for you, it really isn’t a foul odor. And you really only smell it on your dog when you put your nose to their toes; it isn’t a funk you are able to smell from across the room. But what causes this smell? Unfortunately, it’s caused by a few funky things.

Veterinarians agree the smell results from a combination of yeast and bacteria. Before you ban your pooch from the couch or your bed, keep reading. There are two types of bacteria that reside in soil and water and love to live in the warm environment between your dog’s toes. These two bacteria, pseudomonas and proteus, give off the corn chip smell as they settle into the paws.

Interestingly, when the pseudomonas bacteria is cultured in a petri dish, a quick smell proves that it is the bacteria that smells like Fritos, not your dog’s feet.

What to Do if It’s Particularly Pungent

It can certainly be a relatively minor smell, but some dogs get a pretty foul stink emanating from their four corners, especially if they lick their feet a lot. You can reduce the smell by keeping your dog’s feet clean. Their nails should be trimmed, and keeping long hair growing between the toes trimmed also helps. You shouldn’t bathe your dog’s feet every week because it can dry them out, but if your dog goes to the park regularly or plays in water sources, give them a wash after each excursion.

Consider Fritoes your dog’s personal body odor. It could be a lot worse, and if your dog has to have an odor on their feet, corn chips aren’t so bad!