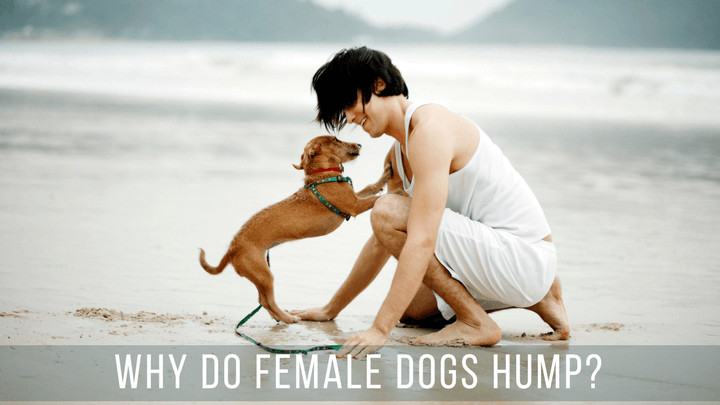 Male dogs are often the main culprits in humping behaviors, but they aren’t the only ones who do it. Female dogs are known to hump, and while she doesn’t do it as much as her male counterparts, it isn’t uncommon for a female dog. Why does she do it and how do you get her to stop?

First, Why Do Dogs Hump at All?

Most people mistakenly believe that dogs hump for purely sexual reasons, and while this is partially true, it isn’t their sole intention.

The biggest reason dogs hump, even females,  is because they’re establishing dominance. Wild dogs like wolves and coyotes are known to establish rankings by humping each other. However, it’s also used to playfully teach young dogs about sexual education until they reach sexual maturity.

Male dogs hump for sexual reasons, and females do, too. If they’re directing the behavior towards you or other family members, it’s important to set boundaries to keep them from making it a habit. Don’t let them jump on you, and make them sit or lay down before they get any sort of attention or affection. Setting strict boundaries keeps your dog from thinking they’re dominant over you.

Females can and do hump for a variety of reasons. A female dog  may hump because she’s bored or stressed out. Some dogs bark, dig, or chew when they’re bored, but it’s possible your female dog works out her stress with humping instead of other “typical” dog stress relievers. If your dog is habitually humping you, other family members, or objects, then you might need to mitigate the behavior with more exercise or a stricter routine to deter the humping.

Medical conditions sometimes present with a variety of odd symptoms, and humping can be one of those. Some dogs with urinary tract infections or other abdominal pain might start humping things because it helps soothe the pain in their belly. If your dog starts humping out of the blue, keep an eye out for urinary tract infection symptoms that accompany the new behavior. If she’s never humped anything before and she’s suddenly doing it all of the time, then it’s time for a veterinary exam.

Finally, it’s just a normal canine behavior. As long as there isn’t a medical reason behind it, female dogs hump for a variety of normal, natural reasons. Trainers and veterinarians agree that if your female dog isn’t habitually humping furniture or family members, it’s a behavior you can generally just ignore.