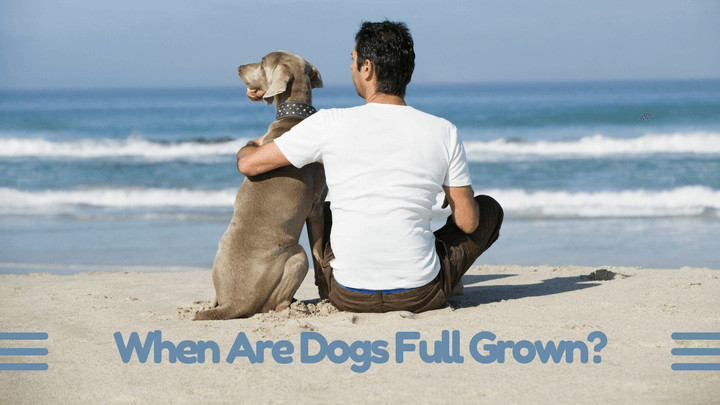 If you think human children grow up fast, you’ve never had a puppy! One day, you’ve got this roly-poly ball of jiggly skin and fat, and the next they’re all legs and sass. Certain types of dogs reach adulthood faster than others, and others grow quickly but remain in a puppy state of mind well into their adult years. What’s the general rule of thumb when it comes to a dog reaching physical and emotional maturity?

When Do the Puppy Years End?

The end of the puppy years are bittersweet, but if you have a Labrador, you might be relieved when they finally outgrow their immaturity and grow up a bit. When does this happen exactly? In medical terms, a puppy is no longer a puppy when they’re between six and 15 months old. Smaller dogs reach adulthood around six or nine months of age, growing into their final adult weight around 10 to 15 months of age.

Large and giant breeds grow much more slowly than smaller ones. While a Chihuahua will reach their adult height and length by six months and their adult weight by one year, bigger dogs like Sheperds or Labradors are 18 months old before they hit their adult weight. The growth of a giant breed dog (Great Danes, Mastiffs, and Wolfhounds, for example) takes much longer, and it’s their body’s way of protecting the joints and bones. A giant breed dog won’t reach their adult weight until they’re three years of age. As they’re growing, their growth needs to be monitored closely and their diet needs special attention to avoid rapid growth and any ensuing joint and bone disorders.

When do Dogs Reach Sexual Maturity?

Females have their first estrus cycle after their six month birthday, but this varies from dog to dog. Ideally, you should have your female spayed before her first estrus cycle, so a spay is generally done when they’re six months. Females spayed before their first heat cycle very rarely develop mammary cancer. Dogs that haven’t been spayed are 200 times more likely to develop mammary cancer versus females who never had a heat cycle. These are pretty incredible odds, so while you’re avoiding adding to the unwanted pet population, decrease your dog’s risk of cancer.

While dogs don’t go through teenagehood like humans do, they definitely change emotionally as they get older. The typical “preadolesence” phase (or “tween” phase if you will) is between four and six months of age. This is when your puppy will become independent and more confident. This is a necessary stage, but it becomes clear how well you socialized your puppy before they hit this stage. They may become more independent, but they’re also naturally more suspicious.

Six to 12 months of age is when your dog reaches sexual maturity as they continue to go through adolescence. Some females will start to become more surly with other dogs as their body preps for their first estrus cycle, and males will start to test your authority or exhibit dominant behaviors. This is completely normal, and you can curb these behaviors with spaying and neutering. They’ll still have a sassy attitude, but removing their sex hormones from the equation gets them through that stage more quickly.

Dogs will reach full emotional maturity between their first birthday and 18 months. This happens more quickly with smaller breeds, and there are definitely breeds out there that don’t seem to ever reach emotional maturity (Labradors are a prime example).

Your dog is going to go through a variety of stages before they’re considered 100 percent full grown. Knowing the timelines for these stages will make training and raising your puppy easier, helping you mold a well-adjusted dog regardless of their developmental stage.