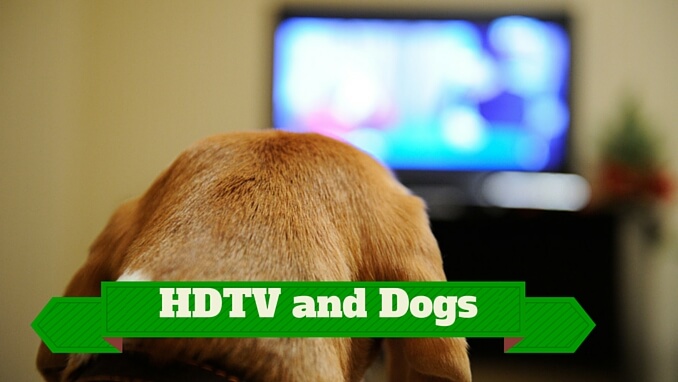 It’s a running joke that only Crazy Dog Owners leave the television on for their dogs when they’re home alone, but it really isn’t something only “crazy” people do. Studies have shown dogs do appreciate the sounds coming from the television, and if you have a dog who loves to bark at the TV when an animal is on the screen, you know this very well. But if dogs have different vision and hearing than humans, do they actually get anything from watching TV?

The quality of TV has increased tenfold over the past five years. Televisions went from fuzzy black and white tube TVs to sleek HDTV screens that seem more lifelike than, well, life itself. How does this affect your dog’s ability to make out what’s on the screen? On older TVs, dogs aren’t able to see them that clearly, but since HDTVs produce more frames per second, your dog can perceive them as well as they do the real world. The average HDTV creates 50 frames per second which is significantly higher than older TVs. Fewer frames per second simply look like flickering images to a dog, but more frames per second allow your dog to see it as a moving picture. LCD and LED TVs offer a better viewing experiencing for canines because the TV is constantly backlit and the display is filtered. This contributes to the moving picture visual versus strobe-like images.

Yes, there are TV channels made especially for dogs! The content is dog-centered, offering dogs stimulation in the form of nature sounds, animals, and people talking. The creators of these channels claim they’re effective at reducing separation anxiety and boredom for dogs who are left home alone. The content isn’t the only thing that’s tailored for canines, either. The frames per second rate and colors are altered, too. A major reason why dogs see differently than humans is because of their color perception.

The cones are the structure in the eye that allow animals and people to see colors and differentiate among them. To see colors properly, the eyes need at least two cones. Humans have three cones, and dogs have two. This doesn’t mean dogs can’t see colors, but they see colors differently than we do and they can’t see some colors at all. The dog-centered channels alter the color on the screen so dogs are able to accurately percieve it and make it seem more lifelike.

Dogs don’t really need TV to keep themselves entertained during the day, but some dogs really appreciate the faux company when you leave a TV on for them. If you want to give them visual and intellectual stimulation, a subscription to a canine-only channel might be worth it to you.