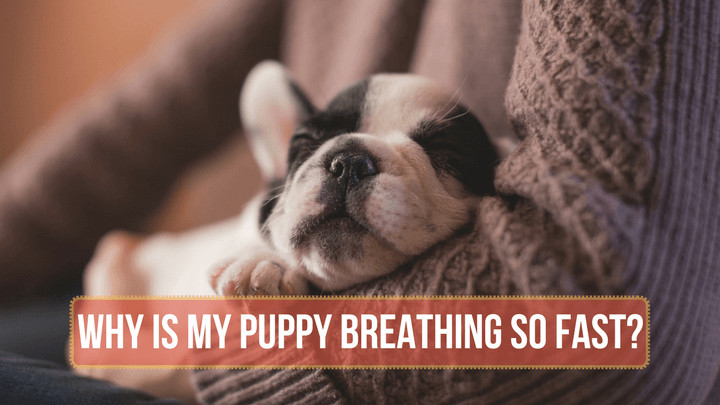 Puppies sleep often and they sleep hard, but they seem to do a lot of dreaming, moving, and vocalizing while they’re supposedly resting quietly. And what does it mean when your puppy has been sleeping peacefully and they start to breathe very quickly? Is this a sign of a medical problem?

How a Puppy Sleeps vs How an Adult Dog Sleeps

If you’ve owned more than one dog, you know there’s a huge difference between how a puppy sleeps and how an adult dog sleeps. Let’s start with the grown-up dog.

Your older dog probably sleeps quietly. He may snore, twitch, or make other noises on the rare occasion, but for the most part, he sleeps without making any noise. He’ll have the occasional dream where he wags his tail, whines, barks, or even growls. He may even throw in some “running” or leg twitches like he’s chasing after something.

A puppy, however, seems like a fairly restless sleeper. Puppies are usually moving quite a bit as they sleep. Their eyes are closed but twitching, as is the rest of their body. They might whine, bark, or move their entire bodies like they’re having a full body dream. Depending on their age, they might even suckle in their sleep like they’re dreaming about nursing.

So Why are Puppies  Breathing so Fast?

It’s established that your puppy’s naptime habits are super adorable, but some of their behavior can be a bit alarming. Have you noticed their breathing picking up in the middle of a snoozefest, and just 10 seconds ago they were breathing normally?

Don’t let this alarm you!

Puppies have much faster heart and respiratory rates than older dogs. As they grow up, these will slow down, but as they’re growing, it’s normal for them to breathe faster than an adult dog does. They do most of their development as they sleep, so consider it training for the respiratory system.

When Should I Be Concerned about their Breathing?

There’s no need to be concerned if your puppy is eating and drinking, free from diarrhea and vomiting, and seems to be 100 percent healthy any other time.
However, there is a time to be concerned, so keep an eye out for any of these symptoms:

If you notice anything out of the ordinary for your puppy when they’re awake or asleep, schedule a checkup with your veterinarian. A twitchy, vocal, fast breathing puppy is quite normal when they’re sleeping, but it’s always better to play it safe when you’re dealing with such a young dog.