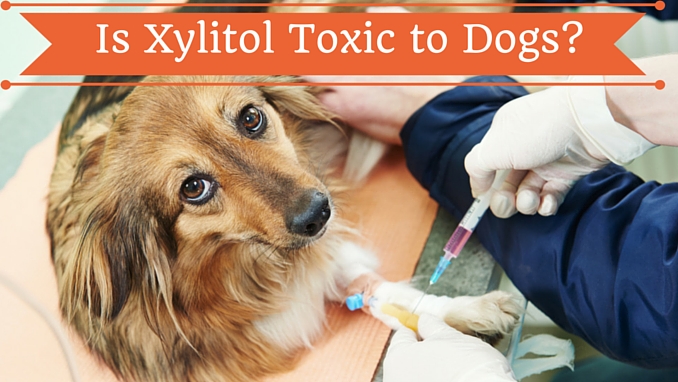 My Dog Just Ingested Xylitol. Is This Bad?

There are many food items toxic to dogs, but many owners overlook things like gum and breath mints in terms of keeping their dogs safe. Gum seems relatively harmless, but there’s an ingredient lurking inside that makes it deadly to dogs of all sizes. If your dog has decided to make your pack of gum a snack, what should you do?

What Makes Xylitol Dangerous for Dogs?

Xylitol is a natural sweetener found in most brands of gum and mints, and it’s also found in toothpaste/mouthwash and some over the counter supplements. It’s very popular in the United States because it’s as sweet as regular sugar, but it has two-thirds of the calories as table sugar. This means it’s ideal for diabetics because it’s low on the glycemic index. Xylitol has been shown to improve oral health in humans because it inhibits cavity formation, reduces plaque, and encourages the production of saliva.

Since xylitol is considered “natural” instead of manmade, it seems relatively harmless. However, it is fatal to dogs in large enough doses.

Why is Xylitol Toxic to Dogs?

Xylitol is very dangerous to dogs because it triggers the pancreas into flooding the body with insulin since the xylitol is so quickly absorbed into the blood. This rapidly and dangerously drops the dog’s blood sugar, making them hypoglycemic in a shockingly short period of time. This effect happens within 10 to 60 minutes of consuming xylitol, and if hypoglycemia isn’t treated medically, it’s potentially fatal.

Xylitol’s effect on blood sugar has been well-documented for years, but recently, research has indicated it can also cause an acute and deadly case of liver disease. A recent report showed that dogs were showing elevated liver enzymes 12 to 24 hours post-ingestion, and many dogs ended up with acute liver failure.

Xylitol affects the blood, too, increasing clotting times and causing various hemorrhages throughout the body. Depending how severe the effects on the blood are, some dogs require a blood transfusion to combat this dangerous effect.

Symptoms of Xylitol Toxicity in Dogs

How Much Xylitol is Toxic?

At this point, you’re wondering if eating a pack of gum is an automatic death sentence to your dog. The answer isn’t always yes; it depends on how big your dog is and how much xylitol they’ve actually consumed.

Dogs only have to eat more than 0.1g/kg of xylitol for their blood sugar levels to crash. The liver starts to feel the effects when dogs consume more than 0.5 g/kg. Finding out how much xylitol a dog has eaten is very difficult because not all companies say how much xylitol is in their product. This is definitely a calculation your vet or the Pet Poison Hotline should calculate, not you. A good rule of thumb to follow is if your dog has eaten something with xylitol, then they need to be taken to a vet immediately.

The more quickly your dog is treated, the less likely they’ll see serious or long-lasting effects. Dogs who have ingested xylitol should go into the vet immediately regardless of the time of day it is. This isn’t something that should wait until the next morning. By then, it could be too late.

Dogs who have just ingested xylitol (less than two hours) and remain symptom-free will be made to vomit to keep the body from absorbing it. This is always at your vet’s discretion; you should never decide to induce vomiting at home. A baseline blood sugar is always taken before vomiting is induced. Making a hypoglycemic dog vomit is deadly.

Dogs showing symptoms are going to need to be hospitalized. The vet runs bloodwork to check their blood sugar, potassium, and liver enzymes. Depending on the results of the bloodwork, dogs need their blood sugar monitored regularly, to receive dextrose IV to avoid a blood sugar crash, and to get medications to protect the liver from potential damage. IV fluids are a must to protect the organs and flush the xylitol out as rapidly as possible.

Toxicity caught early has a great prognosis, especially if no symptoms appeared. Mild hypoglycemia is easily reversed, so prognosis on that is good as well. If the liver is affected or the dog develops a blood disorder, the prognosis is poor.

Always keep your xylitol-containing products away from your dog. You’d be surprised how many dogs find the minty sweetness of your favorite gum delightful and help themselves to a few sticks.