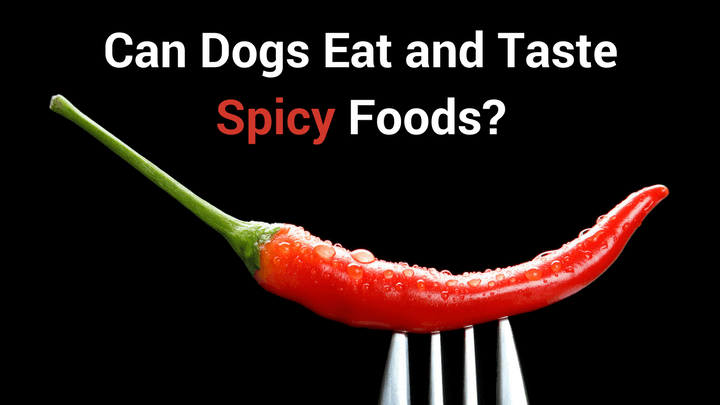 There are so many different levels of spicy, and as people, we all have different tolerances for the level of heat we can stand. Some people can tolerate spicy foods that would burn someone else’s mouth to the point of tears while other people can barely stand pepper.

What about dogs? If your family lives off of hot, spicy dishes, you’ve probably had your dog get a taste of something spicy. Is it okay to give your dog spicy food, or should it be strictly off limits?

[thrive_text_block color=”note” headline=”How Good Are Dog’s Tastebuds?”]
Dogs eat the same thing every day, and they never get sick of it. Is this because they don’t have any choice, or is it because their sense of taste really isn’t that great?

You might think a dog’s sense of taste is more highly tuned than a human’s, but it’s actually weaker! A human has about 9000 taste buds, and dogs only have about 1700. Humans have four basic tastes (bitter, sweet, salty, and sour), but dogs’ taste buds skipped developing their salt receptors during evolution as they consumed a carnivorous diet naturally high in salt.

Dogs eat gross things because their tastes aren’t as refined as ours. Instead, they use their sense of smell when sampling food.
[/thrive_text_block]

Can Dogs Have Spicy Food?

Dogs may not have the exact same taste buds as we do, but that doesn’t mean they don’t react to spicy foods. No matter how little spice you think your spicy food has, your dog won’t have the same opinion as you. Something that’s just slightly spicy to you could be incredibly hot and painful for your dog.

The biggest concern is your dog getting an upset stomach. Vomiting, diarrhea, and a painful tummy are likely if your dog is eating a lot of spicy food. Much like when you eat too much hot food, your dog is going to get the same reaction.

The other concern is the spices in the food. Bottled or jarred products like hot sauce are heavily flavored with a variety of seasonings that are bad for your dog, such as garlic and onion powders.

There’s really no reason why your dog would enjoy spicy food, either. Remember they have significantly fewer taste buds than you do, and while they might not taste the spice, that doesn’t mean their GI tract isn’t going to suffer the side effects.