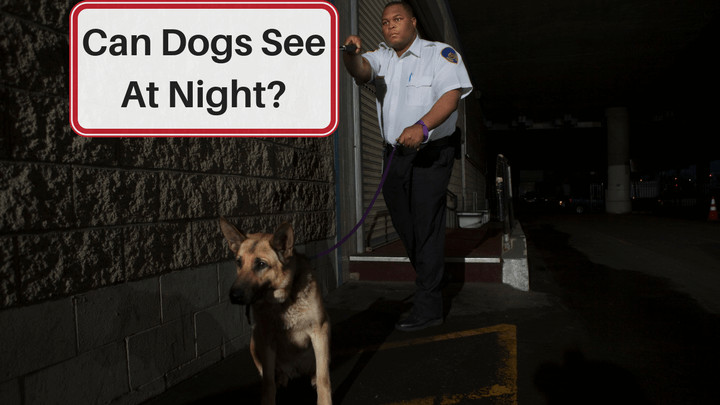 It’s amazing what dogs can accomplish with their senses. Their noses seek out things humans could never locate (their sense of smell is one million times greater than a human’s), and their hearing means they hear their family’s car from a block away. But what about their vision? Their senses are clearly superior in so many things, but is their night vision truly better than a human’s?

[thrive_text_block color=”green” headline=”Canine Eyesight Basics”]An ideal visual acuity in humans is 20/20, but a dog’s normal acuity is 20/75. This just means what you can see at 75 feet, your dog is only able to see at 20 feet.

Basically, your dog is nearsighted. Has your dog ever barked at you from a distance, then when you get closer they seem embarrassed that it was you all along? They’re far more likely to recognize you by smell or hearing than vision.

A dog’s eyes are set farther apart than they are in humans, and a 20 degree angle gives them 240 degrees of vision compared to a human’s 180 degrees.[/thrive_text_block]

Canine Night Vision: Superpower or Not?

As a human, your eyes are designed to see best in bright light, but you can still see enough in the dark to survive. Dogs, however, can see in light five times darker than you can. What makes this possible? Dogs have some pretty cool adaptations in their eyes.

The first is a larger pupil. The pupil is the opening located in the center of the eye, and the size of the pupil is responsible for the amount of light entering the eye. Dogs have large pupils, and if you’ve ever seen a cat’s dilated pupils, they’re exceptionally large. This is a major factor in how well animals see at night. The bigger the pupil, the better the animal sees at night.

Canine retinas have more rods (light sensitive cells). The retina receives light that the lens has focused, then converts the light into signals sent to the brain. These signals create visual recognition. The more rods found in the retina, the more the retina responds to lower light. The dog’s lens is also closer to the retina, so the image relayed to the retina is much brighter because of the proximity of the two.

The tapetum is the biggest contributor to exceptional night vision. The tapetum is located in the back of the eye and reflects light, ensuring the retina has registered any light that’s entered. This is considered the retina’s second chance at light recognition in conditions where there’s very little of.

[thrive_text_block color=”note” headline=”Fun Fact”]You know those creepy pictures you take of your pet where their eyes glow from the flash of the camera? That’s the tapetum! The tapetum cells are very reflective, so while it’s giving the retina a second chance to register the light, it reflects the light back and makes the eyes glow.

Dogs definitely have better night vision than humans do (five times better, in fact), but their overall vision is worse than yours. Luckily they have their other heightened senses to make up for their less than perfect vision, but they’ll still be able to navigate a dark house or yard better than you.[/thrive_text_block]

Dogs definitely have better night vision than humans do (five times better, in fact), but their overall vision is worse than yours.  Luckily they have their other heightened senses to make up for their less than perfect vision, but they’ll still be able to navigate a dark house or yard better than you.