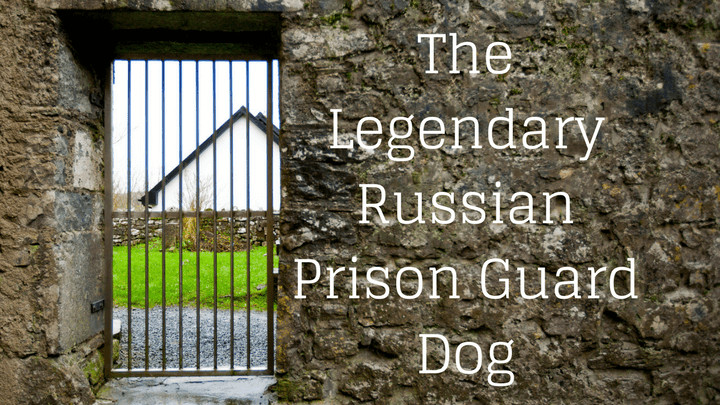 Imagine, if you will, a domestic dog big and strong enough to not only take down a bear but also to kill it with barely an injury to itself. Topping out at close to three feet tall at the shoulder and even closer to 200 pounds, the Caucasian Ovcharka (1) is one of the largest dog breeds in the world and looks very much like the bears it was originally bred to hunt. This is a breed that requires a strict but loving hand, socialization from the time they open their eyes, and respect for the furry tank with a guardian instinct and prey drive so strong it will attack anything perceived as not belonging to its family.

https://www.youtube.com/watch?v=hYCpON2c4PA
Through the bloodlines of the Caucasian Ovcharka runs the influence of the ancient Molasser: the huge Mastiff often seen in Roman artwork wearing a thick collar with spikes and looking incredibly fierce. According to the FCI, dogs similar in type to the modern Ovcharka were known to have been used in the Armenian Army in at least the 1st Century BCE.

Today this influence is present in other domestic breeds including the English Mastiff, Rottweiler and even the St. Bernard, among others. Like many domestic breeds, the modern incarnation of the Caucasian Ovcharka was first given a written breed standard in the 1930s and it was first exhibited at a dog show in Germany around that same time as the “Trans-Caucasian Ovtcharka.” This type was similar to the massive breed today, heavily muscled with a thick coat. A second type, much lighter in build with a shorter coat, the “Kavaskaya Sobaka,” was also common at the time.

It would not be until the Soviets established an “official” breed type within the Russian Kynological Federation in the 1970s that the current name of the breed was adopted. This change in the standard led to the three variations within the breed recognized today and divided by coat type: short, intermediate, and long.

In the United States, the Caucasian Ovcharka was accepted by the AKC into the Foundation Stock Service in 1996. They are classified as a working breed by both the AKC and the FCI.

Caucasian Ovcharka dogs were one of several breeds used to help patrol the Berlin Wall in Germany in the 1960s. There were still almost 7,000 of these dogs working that beat when the wall was torn down in 1989 and they were placed with cautious breeders throughout Germany. German breeders are working to breed out some of the dog’s fiercer personality traits without taking away their intelligence or protective instinct. The Caucasian Ovcharka Working Dog Club of America states that breeders in other countries are seeking to “soften” the breed’s overall temperament considerably, a move that is causing controversy among dog fanciers on both sides of the issue.

It is within Russia, however, that the popularity of the Caucasian Ovcharka has never waned in almost one thousand years. The breed remains popular as a livestock guard, show dog and is used extensively for both military and prison guard duties.

https://www.youtube.com/watch?v=iaJqms27Bjs&t=44s
The Russian military and Russian prison guards put their dogs through a rigorous training regimen. Hundreds of hours are put in by both guards and dogs to ensure not only a respectful working relationship, but also to develop a fearless dog not given to anxiety or unease while doing its job. From the time the pups are nine weeks old they are socialized to accept people as their leaders. Very shortly thereafter they will find themselves in situations that call for aggression and fear. These situations include working at night, as well as exposing them to loud noises like gunfire and prisoners shouting. In each situation, the most aggressive behaviors are the most awarded.

https://www.youtube.com/watch?v=BL-lnkKoS5o
The idea of using the Caucasian Ovcharka as a service animal in this capacity is not a new one; in fact, their job titles changed drastically from livestock guardian to prison guard during the reign of Stalin.

Stalin’s plans were only made possible by virtually enslaving his own people. He had prisons known as gulags built throughout the taiga of the Russian Empire, many of them in the frozen hell that is Siberia. According to a book written in the late 1940s about the forced labor camps, dogs such as the Caucasian Ovcharka were trained to despise any person dressed in torn, ragged clothing. The poor souls forced to live there had no chance of escape with such an intimidating animal barring any break for freedom.

Times have changed, however, and Russian prisons are now used to house actual criminals. The Caucasian Ovcharka is still valued for its prey drive, but intellect and health are factors in selection for this job as well. The Ovcharka possesses the intellect to differentiate between prison guards and the prisoners, just as it does between members of its family (including other animals and people) and strangers. They are expected to attack prisoners on command, yet they are equally expected to maintain their composure and allow their handlers time to assess a situation before jumping into it head first. Prison guard duty is certainly no job for a weak-minded or nervous dog; in fact, a dog with these traits would be ruthlessly cut from the training regimen as it would be liability and a threat to other guards.

The Caucasian Ovcharka is and will always be a guardian, regardless of how many appear in the show ring. Though their job title switched from protecting livestock in the mountains to protecting people in many capacities, they are virtually still the same intelligent, assertive, courageous animal. As such, it should be handled with respect as well as taught to respect people and other animals of all shapes and sizes. The Caucasian Ovcharka Working Dog Club of America states that the Ovcharka cannot ever have enough training or socialization. Per their guidelines, these powerful dogs should be trained in basic obedience prior to six months of age, including sit and stay with distractions, proper heeling and leash walking, manners and being neutral to other people and animals in situations such as the park or in a crowd.

The idea that the Caucasian Ovcharka cannot ever receive too much training and socialization cannot be repeated enough. With proper training and handling these dogs can and do become excellent guardians and loyal friends.